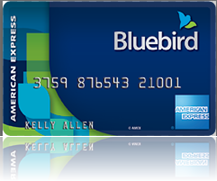 Wow, the national press jumped all over the American Express and Walmart partnership to sell/service the Amex-branded Bluebird prepaid card nationwide (882 articles linked from Google news).

Analysts waxed eloquent about how Walmart is building out its “banking” services and how much cheaper the prepaid card is compared to a checking account.

But in fact, there will be little impact on Walmart shoppers, who can already buy a similar Walmart-branded prepaid Visa card in its stores. And that Green Dot-powered Moneycard will continue to be available, though it sounds like Bluebird could get more prominence. But that will depend on which company is paying the highest slotting fees/revenue share.

But what almost all the press coverage overlooks is that Bluebird is only good at locations that accept American Express (4.5 mil in US), whereas the Green Dot card is good anywhere Visa is accepted (8 mil in US). While most major retailers take both (note 1), that’s still a huge difference in value for many Walmart customers.

Look at the current Walmart financial services menu (pre-Bluebird). It already offers every money-handling service under the sun, including a general purpose reloadable prepaid card with no fees for heavy users (see screenshot below). 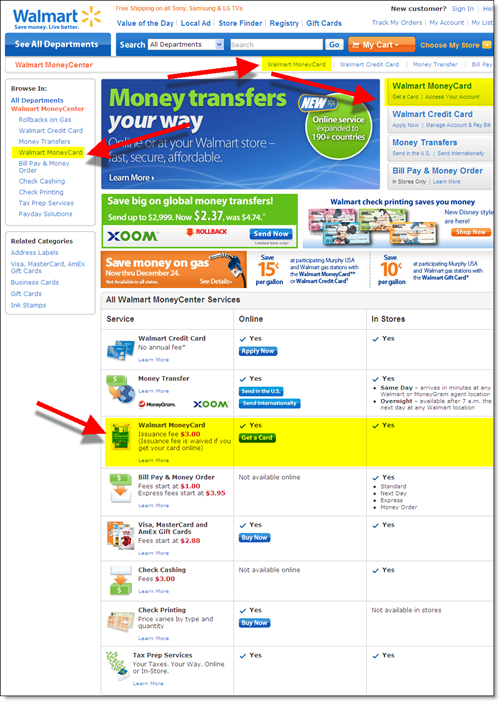 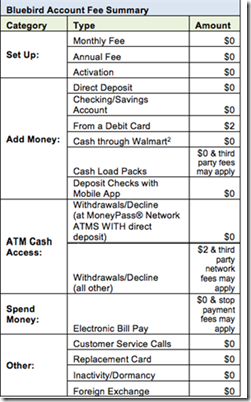 Pricing
Pricing for both the Amex Bluebird (inset) and Visa MoneyCard are low (see below). The main difference is that BlueBird eliminated monthly fees, while MoneyCard charges $3 per month for anyone who loads less than $1000.

Bottom line: Amex got amazing press out of the deal that should help establish it as a leader in prepaid. But it’s a real unknown how many Walmart shoppers want to carry around an Amex card with less merchant acceptance.

I think it may even cause quite a bit of confusion in-store if the BlueBird card is pushed ahead of the Green Dot version.

And while American Express seems to have made important in-roads, it’s not possible to assess the ROI since we do not know how much it is paying Walmart for the distribution deal.

Current MoneyCard fees (9 Oct 2012)
Note: Monthly fee is waived for those loading at least $1000 per month to the card

Notes:
1. Costco takes only American Express, so score one for Bluebird.
2. Customers involved in the Bluebird pilot (sold this year at 80 western U.S. Walmarts) must close their old account prior to 8 Dec 2012 and open a new one. The company is offering a $20 bonus to cover the hassle (link).
3. Amex acquired the website Bluebird.com which currently redirects to BlueBirdMoney.com. A greeting card company operates BlueBirdCards.com, which currently ranks high on Google, but will get crushed by BlueBird.com once the product launches nationwide.