Announced today, the latest round of funding for one of Europe’s leading peer-to-peer (P2P) lenders, Zopa, increases the company’s funding total by nearly 50%.

And now with nearly $49 million in total funding, Zopa is well positioned to do the sort of expansion in the U.K. the company believes will help more people get to know, appreciate, and use peer-to-peer lending solutions.

Giles Andrews, chief executive and Zopa co-founder said, “This is our opportunity to become a significant source of disruption in the personal loans and savings market.” And Arrowgrass Capital Partners, the London-based hedge fund that provided the company’s latest investment agrees. “Traditional banking is becoming increasingly disintermediated by the internet,” said Henry Kenner, Arrowgrass chief executive. 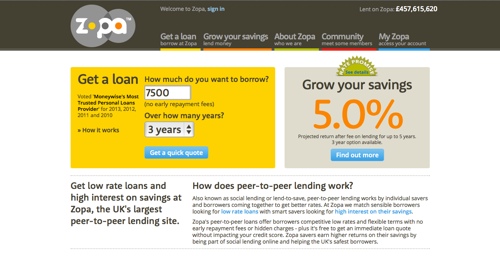 The funding comes at an interesting time for Zopa, as well as other peer-to-peer lenders. In April, the P2P lending sector in the U.K. will be put under the jurisdiction of the U.K.’s financial regulator. Observers believe this could be the first step toward the development of a regulated, alternative finance sector of crowdfunders and P2P lenders.
The British government has supported these efforts as a strategy to encourage economic growth saying, via a Treasury spokesperson, “the government is keen to promote innovation in financial services and wants to support new entrants to the market.”
A few metrics about Zopa:
Zopa was founded in 2005 in the United Kingdom, and demoed their technology at FinovateStartup in 2008.