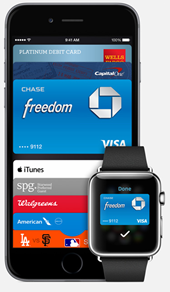 I’ll admit to being caught up in the hype. The 48 hours after Tim Cook revealed Apple’s long-rumored foray into payments were some of the most exciting times in fintech since the 1995 to 1997 period when most of the online “firsts” happened (see note 1).

And we’re seeing more thoughtful fintech posts in the past week than we used to see in an entire year. Thanks especially to Tom Noyes, Cherian Abraham, Brian Roemmele, Celent’s Zilvinas Bareisis and finally today from Gonzo’s Steve Williams for helping me see beyond the hype.

I can add little that hasn’t already been said to the discussion about NFC, payment ecosystems, or the future of mobile payments. Clearly, it marks a turning point for mobile payments and improved U.S. security, and the play-out will be fun to watch.

So here’s my take on the impact of Apple Pay on small- and medium-sized FIs over various time horizons:

In the long run (2017+): Something, but impossible to quantify at this point
(it could even be net positive)

Here’s why bank/CU execs (outside the top-20 credit-card issuers) should not lose sleep over what Apple is doing:

1. Apple Pay (in the physical world) can be used only at contactless terminals
Supposedly, there are 220,000 contactless terminals in the United States. But if you’ve ever tried to use one, you know that 200,000 of them are either not working or are buried behind beef jerky on the counter. This will change rapidly as merchants upgrade during the next few years.

2. It’s complicated to use (at first)
First, you need an iPhone 6, then you need to figure out how to use Apple’s Passbook program, log in to iTunes or take a picture of your card, successfully authorize it, enable TouchID and so on. Millions of early adopters will figure all that out, but then they won’t be able to find a working contactless terminal (see #1) and then they’ll forget all about it.

3. The number of your customers that care enough to move deposit accounts for NFC payments is near zero (for now)
Let’s do the math. Assume that a year from now there are 5 million Apple Pay active users (making at least one transaction per week) or 2.5% of U.S adults. If you have 20,000 customers, that means 500 will be active users of Apple Pay. Most will be happy to use their existing Capital One, Citi, and other rewards credit cards for the transactions. Very few will care that your debit card doesn’t work on the system. Let’s say it’s around 25%. That means you have something like 125 customers who are disappointed with your mobile payment capabilities. If they like you otherwise, how many will move their checking account to get an Apple Pay-enabled version? While the number is probably zero, let’s say it’s 5% to 10%. That means you could lose 6 to 12 customers. Using the 80/20 rule, only one or two of them are profitable. Will it hurt to lose two profitable customers? Sure, but it’s not going to be on your top-10 or top-25 list of worries.

4. There are ways to mitigate any lost wallet share to Apple-Pay issuers
Even if my math in #3 is way off, or you are concerned that you will take a material hit to the bottom line, or you just want to be part of Apple Pay, easy routes will undoubtably be built to get your cards enabled into Apple Pay. Maybe not in 2014 (or even 2015), but certainly within the next couple years. And even if I’m wrong and you are locked out of the iPhone indefinitely, you can create an Apple Pay poaching program where your customers make their charges on a bigco bank card, then you automatically pay those charges off and essentially transfer them to your customer’s checking account.

So my final advice. If you have an employer (or spouse) that’s been reluctant to fund your iThings, now is the perfect time to do an upgrade (just don’t show them this post).

Chase homepage shown to existing customers (15 Sep 2014)
Note: All three links on bottom of page go to the iPhone6 “Apple Pay” features page at Apple.com which leads with Chase (link) 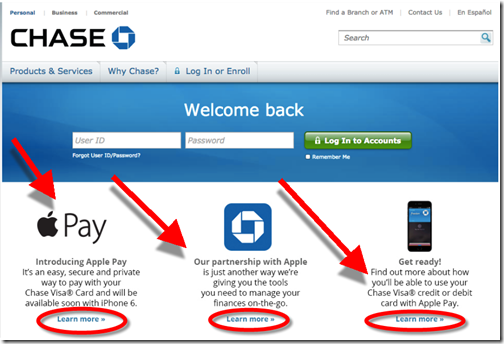