There are two schools of thought when it comes to mobile app design:

American Express (7 for iOS, note 2); JP Morgan Chase (3 for iOS); Zions Bank (3 for iOS); Southern Bancorp (2 for iOS); and a handful of other banks have launched multiple apps. But it’s still the exception: More than 99% of banks have no more than one app for each platform.

Westpac NZ has joined the multi-app group, though oddly it has yet to launch a full-featured mobile banking app (note 3). Yesterday, we wrote about Westpac’s clever Cash Tank, that provides a no-login gauge to monitor account balances.

The bank has another cool single-use app, Impulse Saver, which is basically just one huge red button that users press to make a transfer from their checking account to a savings account.

The amount of each transfer, from $2 to $50, is preset using the app settings (see second screenshot). 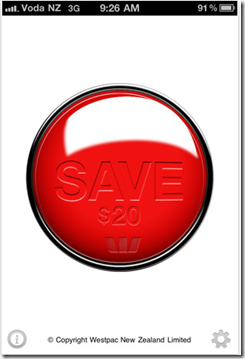 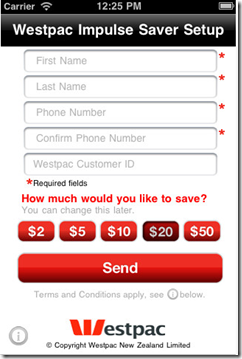 Notes:
1. By single app, we mean one app per major platform, i.e., one app for iPhones, one for Android, one for iPad, etc.
2. In addition, American Express offers at least six more content apps through American Express publishing.
3. A number of reviewers in Apple’s App Store have been criticized for not having a full-featured app. For example, in June 2011 “crazfulla” wrote, “This is a great idea; however, we need a real app that has all the banking capabilities.”
4. Since 1997, our Online Banking Report has periodically given OBR Best of the Web awards to companies that pioneer new online or mobile banking features. It is not an endorsement of the company or product, just recognition for what we believe is an important industry development. If anyone knows of other financial institutions offering a similar feature, let us know and we’ll update the post. Westpac is is the 86th company to win the award and the third in 2012. Recent winners are profiled in the Netbanker archives.