We first discussed the usability advantage of direct-to-the-desktop information delivery in the 1998 Online Banking Report, Creating the Amazon.com of Financial Services  (see note 1). We called it a "meter" instead of today's widget or gadget, but its essential function was to show balance levels on the user's PC without requiring a login each time.

Last week, Wesabe became the first company to implement that concept with its Mac Widget shown below (Wesabe link here). The widget displays the balances in the various accounts tracked through the company's personal finance platform: 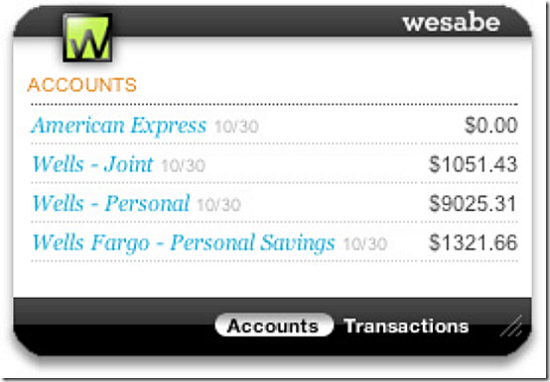 Several other personal finance companies have previously launched widgets including ClearCheckbook which released a Google Gadget on March 14 (here) and  Mac Widget a few days later (here). Other financial widgets are offered by billQ, Buxfer and Mortgagebot (see previous coverage here and here).

However, Wesabe is the only one streaming real-time balance updates thanks to its automated downloading of account data from linked financial accounts (aka account aggregation). Without the automatic updates, a widget is more window dressing than functional tool.

Therefore, we're giving Wesabe its second OBR Best of the Web this year in recognition of its new widget which once again raises the bar for financial information delivery (note 2), if only for Mac users.

2. Recent OBR Best of the Web winners are covered here. Five awards have been handed out this year: two for Wesabe, and one each for Jwaala, Buxfer and Obopay. In the past 10 years, 67 companies have won Online Banking Report's Best of the Web awards. Only five companies prior to Wesabe have won the award twice: Bank of America, Citibank, E*Trade, Everbank, and Wells Fargo.