Washington Mutual testing the waters by selling CDs with
eBay. 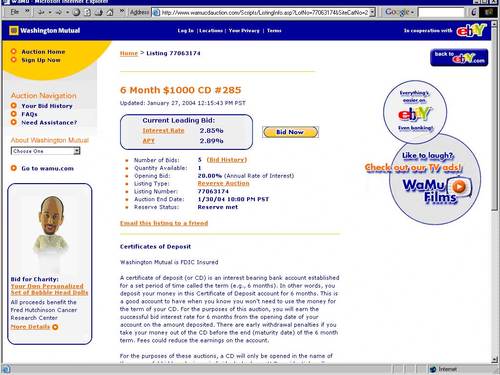 In January, Washington Mutual became the first bank to test selling
certificates of deposit with eBay. The test was conducted on a standalone
co-branded site, rather than being integrated with eBay. Users were required to
register to participate in the CD auction. EBay credentials were not accepted
nor did the certificates turn up on regular eBay searches

Although not the first to try retail CD auctions, Washington Mutual
(Seattle, WA; $289 billion) is the first bank to team with eBay to add
legitimacy to the unusual deposit-gathering scheme at  http://www.wamucdauction.com/
a co-branded site, hosted by eBay. The Bid Your Rate test is
scheduled to run from Jan. 15 through February, with one-hundred $1000, 6-month
CDs auctioned per week, for a total of 600. Apparently WAMU approached eBay with
the idea and paid an undisclosed fee for the development and limited marketing
to eBay users.

Auctioning CDs was tried by several banks in the late 90s, most notably by
PNC Bank which ran auctions on its website for about a year beginning
in Sept. 1999. Several other smaller banks, including the now-defunct USA
Bancshares, gave it try but it never caught on. But that was also before
eBay became a cultural icon.

It’s much like an eBay auction but the bidding runs in reverse. The
auction begins with a high interest rate and is bid down in increments of 5
basis points. In our tests we found the reserve to be 10% and proxy bidding, as
is customary on eBay, was not used. Your bid was automatically entered at the
lowest rate you selected.

From our observations, the bank needn’t have worried about using a 10%
reserve price since all the CDs were quickly bid down to competitive levels. For
example, at mid-day Feb. 9, the 12 CDs closing later that day had all been bid
down to 2.05% or 2.10% rates. In comparison, that day
http://www.bankrate.com/  pegged the
average U.S. 6-month CD rate at 1.23%, with Stonebridge Bank offering the
highest at 2%. You could also get 2% with a savings account at ING Direct.
In Washington state, Washington Mutual’s website offered a 0.95% rate on 6-month
CDs. That CD featured the option of adding to it at any time during the term for
the same rate.

Apparently the test was promoted on a limited basis with banners and links on
eBay, although we never saw one. However, there is no integration with the eBay
search engine. We tested various search terms and found no mention of the WAMU
CDs. Washington Mutual issued a press release on January 14, but is not widely
promoting the service. We found no mention of it on the bank’s website (Feb. 9)
nor did it appear in site search results. 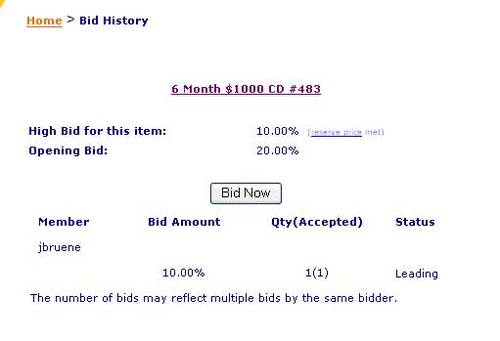 Here’s what you see after entering a successful bid (in
this case 10%) that’s met the reserve and taken the lead, at least for the
moment. Final winning bid was approximately 2%.

At this point, CD purchasing on eBay may be too small a niche for a large
bank to profitably serve. However, it might be a good way to attract hot money,
without repricing your current deposit base, or to create some interest in your
deposit and/or online services. Long-term, we are more optimistic and expect
deposit auctions to eventually become a common practice; after all retail
investors already purchase T-bills directly from the U.S. government in a
similar fashion.