Talk about thinking outside the box: Instead of serving coffee in its branches, Union National Community Bank <uncb.com> is serving checking accounts in a cafe.

The $400 million bank, headquartered in Mt. Joy, Penn., is using a strategy similar to ING Direct, except UNCB has gone as far as to remove its brand from the name, calling the financial store "Gold Cafe" (see picture right).

The cafe features a full retail coffee operation with coffee, lattes, tea, smoothies and so on priced at $1.45 to $4.45 and pastries and desserts from $1.75 to $2.25. The coffee service is run by Lancaster County Coffee Roasters. 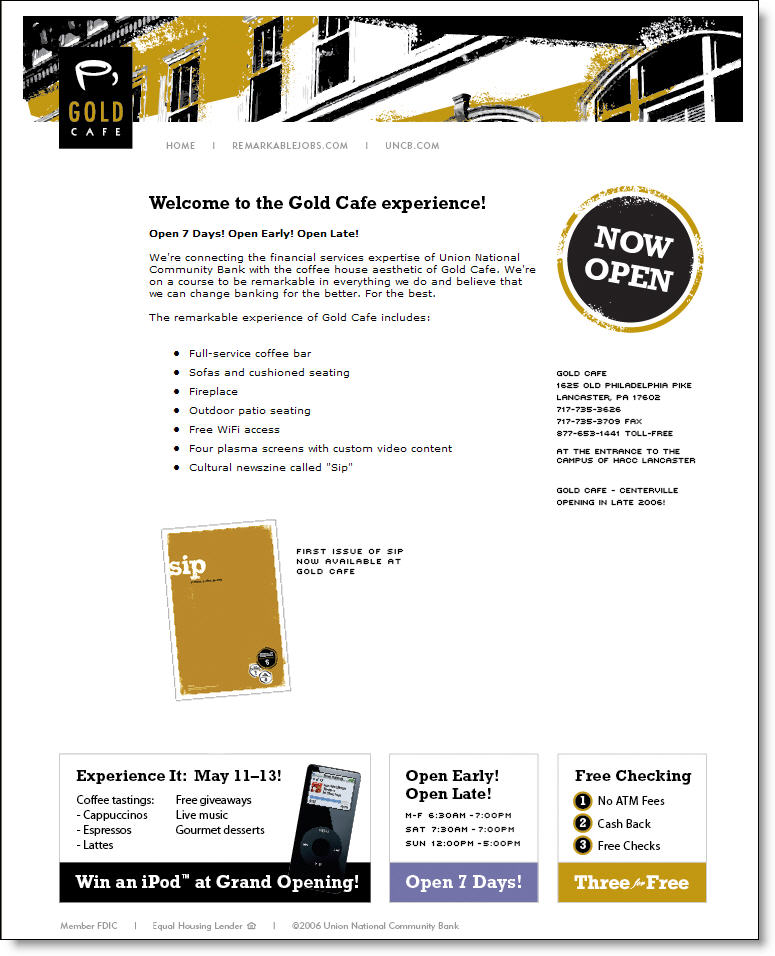 The branding has also been extended to its website, GoldCafes.com, where the concept is supported with an emphasis on the lengthy hours, 6:30 am to 7:00 pm, Monday through Saturday, and noon to 5:00 pm on Sundays, 82 hours in total. The website also features information on an iPod giveaway during its May 11-13 grand opening. The only banking product mentioned is free checking in the lower-right corner (see screenshot).

The branch, er cafe, located near a major community college in Lancaster, Penn., includes a coffee bar, couches, an outdoor patio, fireplace, free Wi-Fi, and the ubiquitous plasma screen monitors. The bank has also created Sip, a "cultural newszine" available only in the cafe. A second cafe is set to open later this year in Centerville.

Analysis
We can't predict whether this concept ultimately works. Although we like the new-age branch concept popularized by Umpqua and others, this might be over the top. One of the biggest reasons to build branches is for their advertising value, placing the bank's brand in front of thousands of commuters and errand-runners each day. By calling it the Gold Cafe, the UNCB loses the normal branding value, but the highly unusual strategy will generate a large amount of publicity, overcoming the initial customer confusion of using a bank named "Gold Cafe." However, this is a unique situation that wouldn't readily work for other financial institutions. 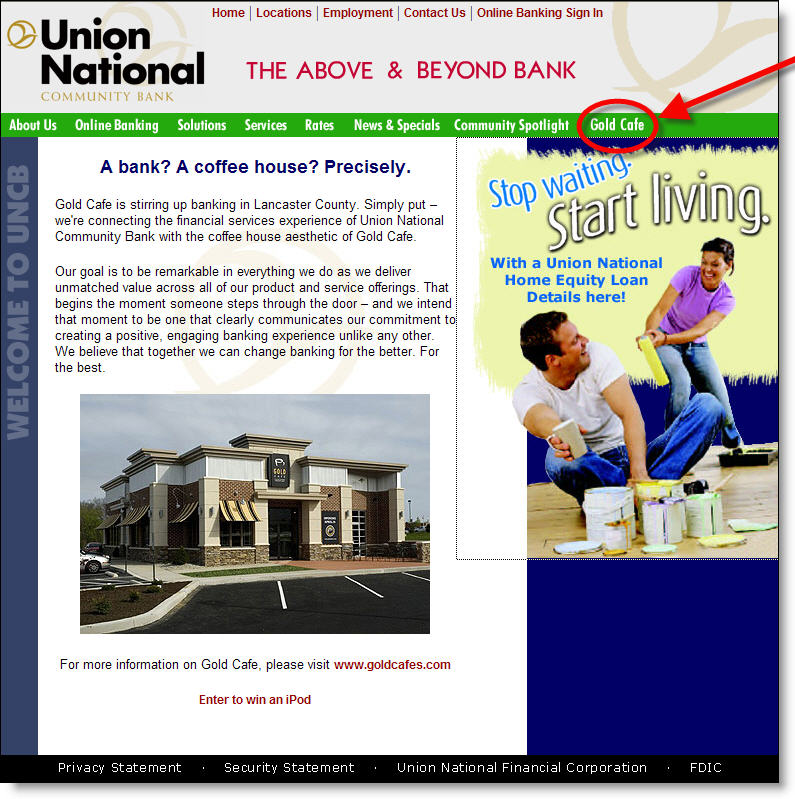 The initial website is just a single page (see above) and badly needs an upgrade to cash in on all the publicity. At a minimum, prospective customers should be able to get a virtual tour of the cafe and open an account online. The site will be heavily visited by banking analysts and reporters and should do a better job supporting the publicity it's bound to attract, although the parent's home page does include a series of photos of the new concept along with a Gold Cafe link in the main navigation (see screenshot right).

If anyone has a chance to visit the branch, let me know what you think of it.