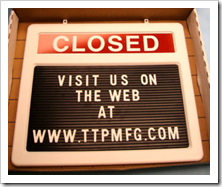 In Demise of the Branch, a report we published in April 2006, we opined that the branch’s influence in retail banking had peaked. But it was perhaps a bit premature. It turned out that strong retail banking revenues (for example, interchange and overdrafts from the massive uptick in debit card usage) would fund the overbuilt branch network for a few more years.

But the good times are over, at least from a brick-and-mortar perspective (see note 1). And as much as I feel for the tens of thousands who will lose jobs, based on my personal experience, I am OK saying good riddance to the branch. While the people I’ve encountered have been super friendly when I hand over deposits, when there has been even the slightest complication, the experience has ranged from poor to abysmal.

And it wasn’t that the people were uncaring or unintelligent. In fact, usually they seemed to be trying hard to solve things, but just did not have the support they needed (training, systems, empowerment, whatever). Overall, my branch banking experience has been a net negative for my feelings about the banks I’ve used (note 2).

Online and mobile have already replaced much of the the transactional and informational activity. And we are fairly far along on the path towards replacing customer service and sales with digital alternatives. But how do you replace the important brand-building benefits from a high-profile physical presence?  In other words, what’s the digital equivalent of the corner branch?

The answer is right in front of you. If your best customers interact with their phone and computer much of the day, you need to be where they see you. That starts with an awesome website, brilliant mobile app, and tight landing pages. But it’s much more than that. It’s being in search results. It’s serving ads where prospects read the news. It’s being in the news feed itself because you do interesting things. It’s getting permission to market to the customer’s inbox or message them on their mobile.

You already know all this. But now it’s time to really focus on the digital channels. And when there’s not enough money to go around, I hope there is serious consideration to downsizing the branch network. Because the last thing you want to do in 2012/2013 is put forth a half-hearted online/mobile offering.

Have a great holiday. And thanks for reading. You have no idea how much I appreciate it! — Jim Bruene

Notes:
1. I still can’t prove that U.S. branch banking has peaked, but if you look at the overall P&L of retail banking going into 2012, something has to give. And I think the branch system is a prime candidate for “right sizing.” And I’m not saying the branch disappears entirely, at least not in my lifetime. It’s going to be a gradual decline in numbers, employments, square feet, sales, and so on.
2. Mostly, I’m talking about personal experiences at various large banks. However, the first 10 years of my adult life a credit union was my primary financial institution. It’s where I got my first credit rejection. (Because I had no credit history, the CU at my office wouldn’t give me a credit card despite my new job as an engineer in a Fortune 50 company. But a big bank in a neighboring state did.)