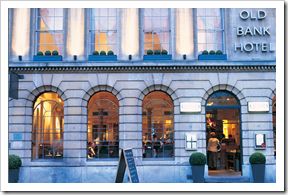 There has been much discussion about the future of the branch. We’ve weighed in on it a few times (note 2). And of course, we are completely biased towards remote channels.

While it’s clear that branch transactions are headed downwards, many still believe the branch has a reasonable future as a center of for sales and marketing. Logically, this makes sense because most of us opened our primary accounts in a branch way back when.

But what’s the reality going forward?

Certainly branches are a good source of new accounts. But what is the acquisition cost?  I’m not going to pretend to know the answer, but it’s interesting to look at how many new relationships a typical branch opens in a month.

Ignoring routine cross-sold savings accounts, credit lines and such (important, but usually less dependent on branch sales personnel), how many brand new primary account relationships (e.g., centered around a checking account) are sold in a typical branch each month? Would you guess 50? 100? More?

What if I told you it was about 2 per month in the United States, if you ignore the top-20% of high-performers? Would that change your thinking about the future of branch-based account opening?

Assumptions
I haven’t seen any figures on this, so bear with me while I do a back-of-the-envelope calculation, which I think proves the point, even if there are a number of unsubstantiated estimates here:

That may sound low, but it’s overstates the value of the typical branch considerably. More refinement is needed:

So now, we are down to 10 million “net new” accounts delivered by branches, or about 2 each week per branch.

But that’s still overestimates the impact of the “typical” branch. Using the Pareto principal (80% of new-account volume comes from 20% of the branches), then 80% of the 10 million “net new” accounts, or 8 million, were opened by 20,000 high-performing branches. The remaining 80,000 branches opened just 2 million net new accounts (note 3).

So, ditch that $2 million branch remodel, re-energize your online/mobile services and start driving prospects to your remote channels (note 5).

Update (9 PM): A reader (thanks Mr. Pilcher) noted that the business market is also a big factor in branch sales activity. Agreed. Using the same logic as above, assuming 7 million U.S. businesses with employees and 20% annual churn, each of the 80,000 lower-performing branches would add 2 new business relationships per year. But given their value, that could be more important than the 2 new retail relationships added per month.

Notes:
1. Photo of the Old Bank Hotel in Oxford (UK), which was a bank for 223 years until purchased in 1998 to be renovated into a hotel.
2. Our one and only report on the subject was published in 2006 here (subscription). There is nothing wrong with branches. Customers like them and they are important brand ambassadors. But most locations are just not cost effective in an increasingly digital world.
3. I realize that most branches open dozens of accounts every week; but here I’m trying to focus only on “net new relationships.” In other words, new household relationships that would have gone to the competition if the physical branch hadn’t been there. It’s impossible to measure, so this is complete speculation.
4. The higher performing group does about 15x that volume, or 33 new accounts per month.
5. Our latest report published last week, 2013 Guide to Online & & Mobile Banking Products, Pricing & Strategy (subscription), sheds some light on your priorities going forward.