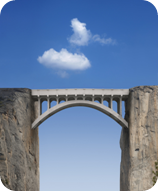 Quick. What comes to mind when you envision mobile banking? I’m guessing most of you pictured a mobile website or shiny new app running on a recent iPhone, Blackberry, Android or other smartphone.

And if mobile banking was used only by techies, that would be about right. But banking is used by just about everyone, and everyone still doesn’t have a smartphone and Internet data plan.

According to the latest study out of Pew Internet (note 1), 82% of U.S. adults have a cell phone (and another 6% of the total live in a household where someone else owns one). And 72% of those cell phone owners use text messaging while only 38% access the Internet through their phone.

And only 60% of the mobile-Internet users, or 23% of all cell phone users, are frequent users, accessing the Internet 3 or more times per week (note 2).

So the text-banking gap is 49% (72 less 23) or half of all cell phone users. Those are the people that use text messaging but do not regularly access the Internet through their phones. Another way to think of it, the non-Internet-using segment is more than twice the size of the mobile-Internet-using group. Or more simply, text users outnumber (frequent) mobile Internet users 3 to 1.

Bottom line: Don’t overlook the mainstream text-message group for both alerts and balance inquiries. And make sure your marketing and educational material speaks to the sizable segment that could care less about your new iPhone app and just wants to know how to txt for their bal. 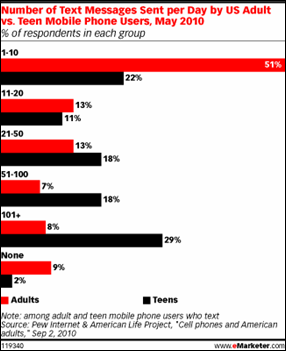 2. In comparison, text-message usage is crazy high (see eMarketer graph of the Pew Internet data inset). According to the Pew data, adult (18+) text-message users send/receive almost 40 text messages a day. Of course, that’s nothing compared to the thumb-weary, under-18 crowd who send/receive an average of 110 messages per day. Side note: The wording on the question asks for the number of messages sent AND received, so one exchange, text out and reply back, should only count as one message. But I’m guessing respondents are thinking of this more as “sent OR received” so that each exchange counts as two messages. I also suspect the kids are over-estimating their usage quite a bit, wanting to wow the researchers with their uber-connectedness. But the bottom line is the same: Teens have embraced texting, and adults have caught the bug as well.
3. For more info on mobile banking, see our mobile banking series in Online Banking Report.