In 15+ years of accepting credit cards, there have been few notable communications from our acquiring bank or payments gateway, other than normal transactional messages (note 1). Square looks to be changing that with a focus on merchant (and end user) experience.

For example, today I received an email outlining Square’s latest platform enhancements (see first screenshot). The message included an enticing Open for Business with an invitation to watch a 70-second video outlining enhancements to its merchant platform, including built-in rewards capabilities (note 2).

The company has grown quickly. Basically starting at zero at the beginning of the year, they are now doing up to $11 million per day in card volume. More impressively, they are up to 800,000 merchants. Assuming a $65 to $70 average ticket, that’s around 150,000 transactions per day, or 4 to 5 million per month. But that also means the average merchant is only doing 1 transaction every 5 or 6 days. 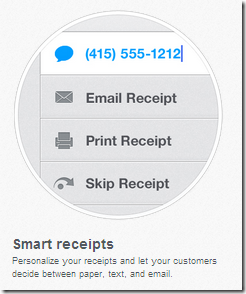 And the user experience is far from perfect. Square has suffered growing pains as it learns to manage a business fraught with fraud and uncertainty. We tried to use Square at Finovate last May and couldn’t get transactions authorized, apparently due to tight account limits in force then.

Four months later at FinovateFall, most transactions were authorized, much to the delight of attendees who used it. But unbeknownst to us (note 3), the money just sat in the Square account waiting for us to confirm our bank account. One small test-transaction had been sitting there since May.

Bottom line: The company flat-out does a great job with design and UX, very Apple-esque. I expect to see a lot of innovation out of Square given its funding, valuation, and celebrity founder. The promise of turning transaction receipts into a dynamic communication is especially interesting (previous post). 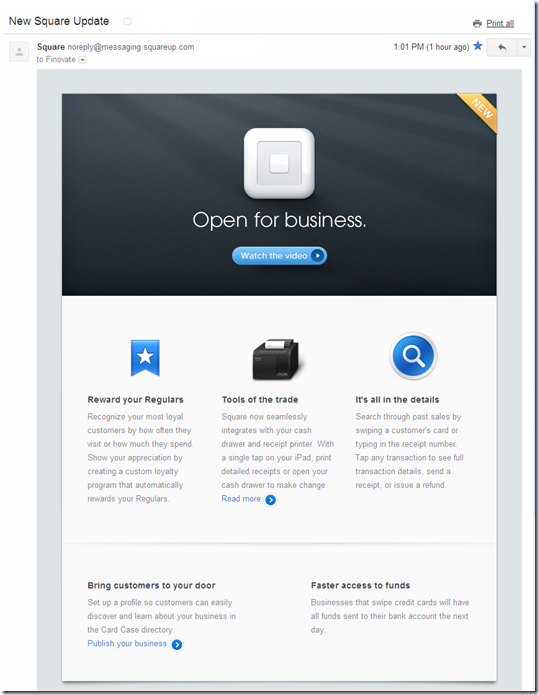 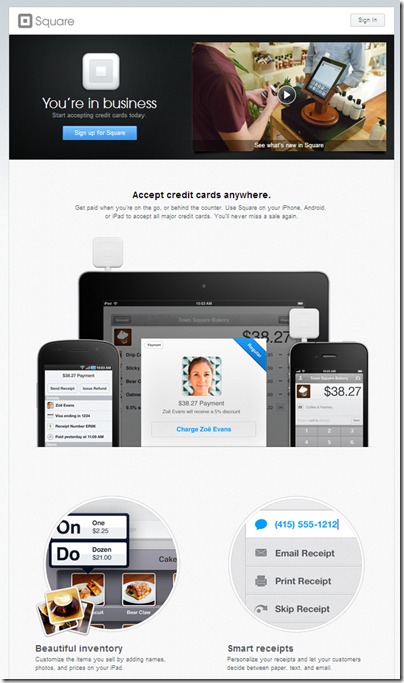 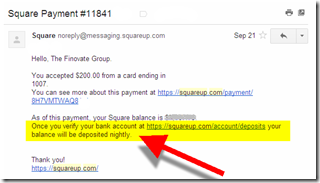 1. It could be that I’ve simply forgotten messages received years ago. But I can say for sure that there have been very marketing/customer service messages, because I pay attention to them. My acquirer is not one of the major players.
2. TechCrunch has a good rundown of the new features.
3. In fairness to Square, they did mention on the merchant receipt that we needed to verify the bank account. But during the heat of the conference, I never noticed that. Click on inset to see the company’s transaction receipt (highlighting mine).
4. I wonder what it will take to convince Japan’s Square-Enix Holdings, creator of Final Fantasy (video game) to part with the Square.com domain name (which is currently unused).