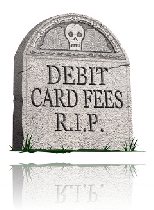 The debit card fee debacle was an interesting drama to watch. I’m sure there are lots of lessons here for a future biz school case study. But really, was $5/mo for a service that many consumers use daily, such a big deal that even Obama had to call BofA out? We spend two or three times that each month on extra pizza toppings alone, but I don’t see anyone bad mouthing the pepperoni industry.

While it’s clear in retrospect that BofA should have played this differently, rolling out the price increase gradually for instance, or upgrading its debit card product at the same time (note 1), the bank was at least being up-front with its pricing and reasons.

And the whole episode is not just a loss for BofA, but for the whole industry, as one its most popular products is turned into a regulated utility with Durbin controlling prices on the merchant side and public opinion squashing fees on the consumer side.

Here’s the winners and losers from BofA’s capitulation on debit card fees:

Notes:
1. We recently looked at optional fee-based services banks could build using remote banking value-adds. See our May 2011 Online Banking Report (subscription).
2. I’m not predicting layoffs. Honestly, I have no idea. There are way too many factors at play to make a direct connection. But certainly, the one-two punch of interchange price controls combined with the fee backlash, make cost cutting seem the more palatable course of action to improve profits. And to the extent that smaller players pick up incremental business, they could hire a good chunk of those laid off.