Sometimes innovation in loyalty program development is its own reward.

London-based Red Zebra Analytics announced that it has picked up a “seven-figure” investment from SBT Venture Capital. The specific amount of the venture round was not disclosed. But the figure is believed to be under five million pounds (approximately $8M USD). The capital also represents the first significant funding for the loyalty program specialist. 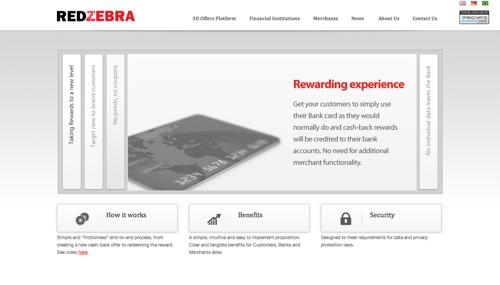 A self-described “offers generation and delivery company” Red Zebra Analytics provides technology that analyzes bank transaction data in order to provide highly-targeted offers. Consumers review and select personalized offers from a “rewards hub” inside their bank’s online banking environment via the channel of their choice. And once accepted, taking advantage of offers is as simple as paying with that bank’s credit or debit card – no vouchers and no codes necessary.
According to Red Zebra CEO, Attul Sehgal, the new capital will help the company grow its sales and marketing initiatives. The technology already has been deployed in Germany, as well as in Southeast Asia.
Founded in August 2011, Red Zebra Analytics demoed its technology as part of FinovateAsia 2013, and will be on stage as part of the show at FinovateEurope 2014 next week. For info on how to see Red Zebra live in London, click here.