Sometimes the best ideas are the simplest ones. Ten years ago PSECU launched the Upost@home deposit service. It allows members to manually enter their deposits in the CU’s online banking system for immediate credit, then mail them to the CU in a postage-paid envelope.

The service, launched in late 2001, was little publicized outside of PSECU’s member base during the first two years. We first heard about it in late 2003 when a second credit union licensed the service. We gave it our highest honor, an OBR Best of the Web award (note 1), one of only five given during the post-bubble dark days of bank-tech innovation (2001 through 2004).

At the time, it seemed an almost crazy idea. An online/offline honor system for deposits. But the CU knew what it was doing. It limited the amount that could be deposited and which members were allowed to use the service.

Now the results speak for themselves (see annual totals in table below):

Upost has turned into the least loss-prone method of accepting deposit, including the branch!

Another interesting data point: The CU is processing almost 50,000 Upost@home deposit items per month, about one per month per member enrolled in the service, a pace that’s stayed remarkably consistent over time.

Bottom line: We’ve listed PSECU’s Upost@home on our annual list of top online/mobile innovations of all time (it was ranked #24 of those invented in the past 10 years and #42 of all time). But in terms of “bang for your buck,” it’s probably in the top-5. 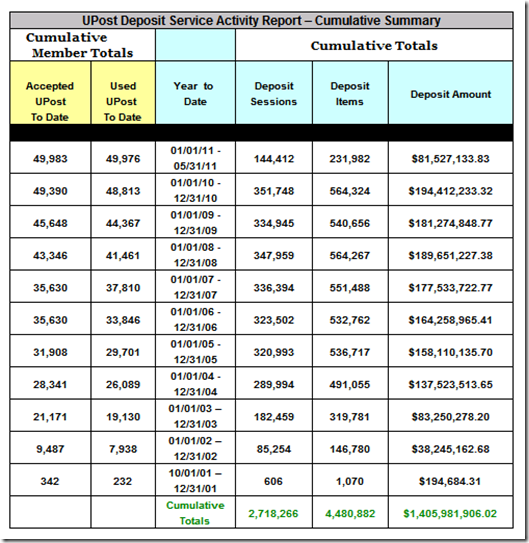 Notes:
1. The original article published in Online Banking Report (OBR #103) is reprinted in the Netbanker archives here.
2. The list of top innovators was published in OBR #188.