According to story in Wednesday's American Banker, Provident Bankshares, a $6 billion Baltimore, MD-based bank, has opened a direct bank to help reduce customer defections to other online banks (see screenshot below). In testing now, the new unit is slated for official launch in 2008. And unlike many other regional programs, Provident intends to market the new bank within its home market. It even plans to advertise to select visitors on its main website, <web.provbank.com>.

While the bank risks cannibalizing its own deposit base, it feels that the direct bank, combined with the reputation of the parent, will help stem deposit outflows. The new bank will operate at <provident-direct.com>.

Analysis
I'm not convinced slapping a "direct" on your name and boosting savings rates ten-fold is all that compelling of a strategy (note 1). Sure, FNBO was able to add $1.5 billion in deposits, but only by offering a way-above-market 6% rate until just a month ago (see previous post here).

Dueling websites create channel conflict. Depending on how they are compensated, branch staff will either move everyone into the online-deposit account, or keep it a secret and hope never to be confronted by an angry customer wanting to know why they are earning 75% less in the branch than if they moved their money online.

However, if Provident can keep costs down, operating the unit as more of a "virtual direct bank," with little additional expense other than a small website and a few dedicated sales/support reps, and figure out how to manage channel conflict, it could pencil out. And the bank can also use the unit to test new products and pricing without impacting its larger customer base. 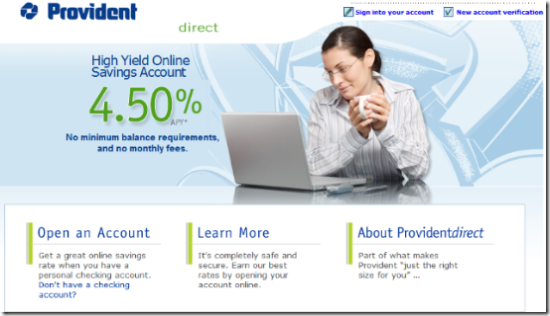 1. Actually, the high-yield rate at Provident Direct is 15 times higher than its 0.3% standard savings rates. But for higher balances, at least $25,000, the parent bank already offers a 4.0% APY money market account, just a half-percent under the high-yield rate.