You’d think that seven months after Apple launched the App Store for the iPhone, it would no longer be news when a U.S. bank adds an application to the store.

It’s not like a cost-prohibitive slotting fee is involved. Developers pay Apple exactly zero dollars to be listed in the store (note 1). Apple’s revenue is from the 30% share of any fees charged for an app. All the bank apps are free, so that’s not an issue.

But it is news since the addition of PNC Bank two weeks age (app here) brings the grand total of bank-specific apps to four, five if you count PayPal. Even if you include the several dozen banks supported by Firethorn’s multi-bank app, there are still no more than 40 banks supported (note 2). And there’s not a single credit union, yet.

Here are the five App Store participants in order of their appearance:

Wells Fargo has an iPhone app, but it’s not yet shown up in the official App Store.

PNC mobile banking app
PNC’s entry is a full-featured app powered by mFoundry. Along with balance and transaction activity, it includes bill pay, funds transfer, and an ATM finder with location-based capabilities. Users must enable mobile banking from within online banking in order to use the app.

The app has risen from number 17 in the Finance category a week ago to 13 today (note 3). However, the app has not yet made it to the PNC website (note 4). 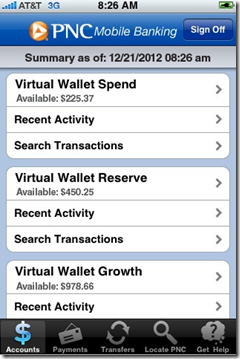 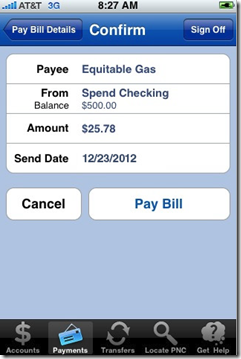 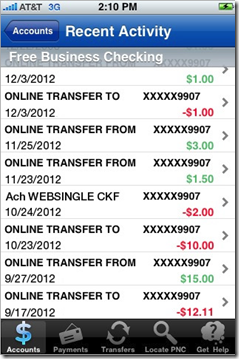 Notes:
1. The app does need to be approved by Apple, a process that can take weeks or longer.
2. Users can also track thousands of financial institutions through Mint or PageOnce.
3. Bank of America is #1, Chase is #4, PayPal is #5, Mint is #6, Firethorn is #9.
4. A PNC.com site search for “iphone” yielded just one result, an iphone listed in a mobile banking compatibility table. (Off topic: Note to PNC Bank, your site search doesn’t function in Firefox 3.0).
5. For more information on the market, see our Online Banking Report on Mobile Banking and the latest forecast in last month’s Online Banking Report Online & Mobile Forecast.