The social networking phenomena has entered a new phase: eCommerce. It has always been a bit hard to visualize mainstream businesses, like banks, book sellers, or phone companies making a profit on MySpace. It's been a great place for musicians and online dating companies to grab market share, but a MySpace Checking Account didn't seem just around the corner (see MySpace coverage here).

All that changed May 24, when Facebook opened its network to outside developers, making its service more like Windows than MySpace. Already the service has grown by 3 million users, more than 10%, in the past 4 week, to 27 million (see Facebook profile in today's Wall Street Journal).

More interesting are the 893 new services have opened their doors on the platform. The most popular, Top Friends by Slide, already has 6.4 million users. Yes, that is no typo, in one month a Facebook service grew to more than 6 million users. With traditional marketing, it would have cost a bank or card company as much as $1 billion to attract that many customers assuming acquisition costs of $100 to $150 per new account.

And it's not just the one app. A new Seattle-based music preference service, iLike, has added 3.8 million. There's not a whole lot happening in commerce apps YET, the first financial company with a service offering, Lending Club (see previous coverage here), is the most popular business app, with just under 10,000 users. That's about what iLike attracts in a busy hour, but for a financial services company, and especially a startup, that's huge, a grand slam using tired baseball metaphors.

For many reasons, it takes longer for traditional companies to pounce on new opportunities. But over the summer we'll start seeing hundreds of businesses launch on Facebook. By next year at this time, the Facebook apps directory will probably look like the New York City Yellow Pages (or at least San Jose).

Searching the site, we only see four financial services that have launched on Facebook:

But so far there is no:

Let the race begin. But you better move faster than you've ever moved before, if you want to get the huge first-mover advantage on the Facebook platform. Good luck. 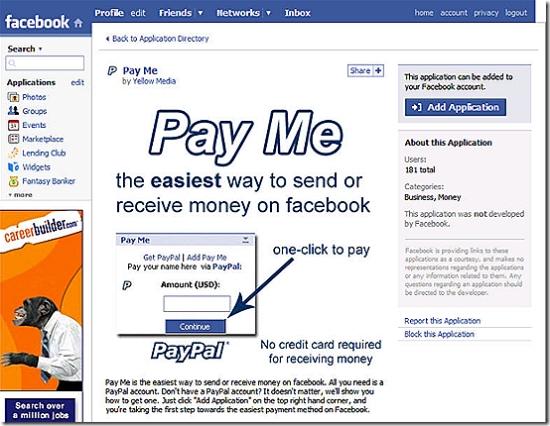