Pageonce, the largest PFM from a company not named Intuit, is abandoning its $4.95/mo subscription for mobile billpay and moving to a yet-to-be-determined transaction fee for each bill paid (note 1). The change was revealed at Monday’s Future of Money conference and I confirmed yesterday with COO Steve Schultz.

The company has been testing various price strategies and found that per-transaction prices were more popular with customers. Its model predicts a five-fold increase in volume with the new fee structure, moving from $40 million annually to $200 million (note 2).

Schultz speculated that customers are used to paying this way for financial services. And it helps that an electronic billpay transaction displaces an out-of-pocket cost of $0.50 or so (stamp & paper check).

Pageonce is positioning itself as a mobile wallet, starting from a position of strength on the billpay side, rather than POS transactions. Schultz says eventually they’ll be at the point of sale and P2P as well. Because those three activities are all part of the “wallet experience.”

But the company is not abandoning its PFM roots. Mobile wallets also need tools to manage and track spending. Pageonce is chock full of those.

My take: While I can’t point to specific tests of my own, most banks that have experimented with transaction fees have found them to be quite unpopular (of course, so are subscription fees). My advice <cue broken record>, for banks anyway, is to bundle several value-adds popular with the target segment and sell the package for a monthly subscription fee (or a discounted annual fee for your fans) (note 3).

How they do it: 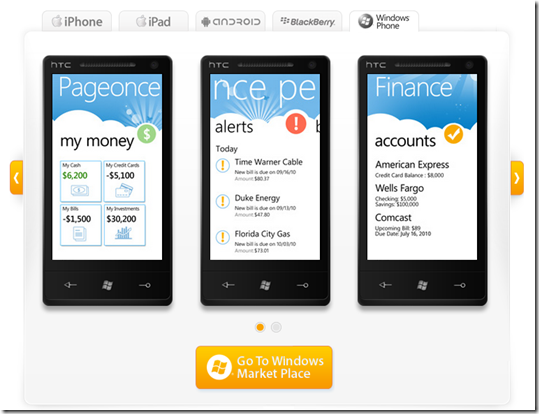 —-
Notes:
1. The company is testing fees from $0.25 to $1.00 per bill. I see no reason to undercut the price of postage, so I’d guess they end up closer to $1.
2. Assuming $1,000 in monthly billpay volume per active user, that implies the company currently has only 3,000 active billpay users.
3. For more information on subscription pricing for financial institutions, see our Online Banking Report (May 2011).
4. See TIO Networks demo at FinovateSpring May 8/9.