Pageonce’s drive to create a mobile checkbook on your smartphone just reached a new gear.

The new service, Pay Anyone, gives smartphone users the ability to make the sort of frequent, informal payments typically reserved for checks. Rather than write a check to the landlord or the babysitter or the repairman, users will simply be able to make the payment as part of a person-to-person transaction using their Android or iOS device. 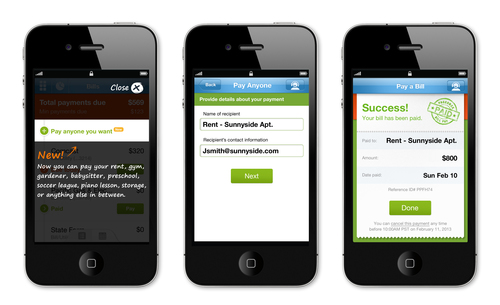 The new app is designed to deepen Pageonce’s presence in the local payments market, where checks written to small businesses and individuals represent trillions in purchase value. Here’s a closer look at what’s on the table:
Pageonce demoed its Personal Assistant and Bill Assistant at FinovateSpring 2010. A look at Pay Anyone is available here.