I’m sorry to see that Wesabe has thrown in the towel and will shutter the financial management portion of its website, leaving just the online forums intact. Customers have until July 31 to export their financial data stored at the company.

I have been a long-time fan and have been inspired by founders Jason Knight and Marc Hedlund. The company was the first VC-funded player in the online PFM space, beating Mint to market by a good nine months back in 2006. We’ve written about them in Netbanker and Online Banking Report, and they presented on stage at our first FinovateStartup (2008 video).

Wesabe’s been pretty quiet this year and traffic has been on the decline, but it’s still a respectable 40,000 uniques per month (see below). I was hoping they would soon be announcing a new round of funding, but obviously that didn’t come through. But I am somewhat surprised no other PFM player stepped in to purchase the assets, especially given Mint’s $170 million exit nine months ago (note 1). I’m afraid it’s a sign that the standalone OFM space is struggling.

It also illustrates the point we’ve been making for a long time: The first hurdle for market acceptance is trust. And it’s difficult for a non-bank financial management startup to earn enough trust from enough people fast enough to survive. Mint proved that it can happen, but most OFM players will need to partner with banks and credit unions to overcome the trust barrier.

Still, the Wesabe case is surprising. Well into its fourth year, with a solid track record, a core group of fans, some cool technology, and a straightforward white-labeling model, it seemed the company had made it far enough down the trust curve to be one of the survivors. But in a Wesabe groups discussion forum a few hours ago, CEO Hedlund gave a pessimistic assessment of the company’s revenue outlook. In response to several posts from members saying they’d gladly pay a subscription fee to keep the company afloat, he said: 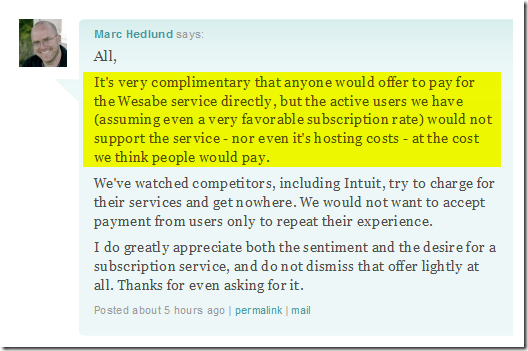 One interesting side note, Wesabe says it will open source some of the code base, so users can continue to operate the service on their own computers. That may create opportunities for scrappy entrepreneurs to build something from the ashes of Wesabe, a fitting tribute to the PFM pioneer. 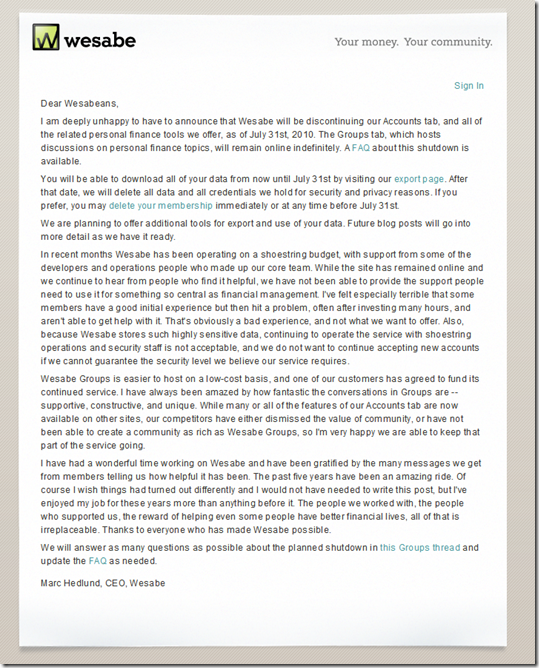 Notes:
1. Wesabe was philosophically opposed to taking outside advertising, figuring that it was not in their users’ best interests, so the ad-sponsored biz model used by Mint was probably not on the table.
2. For more on the OFM/PFM market, see our latest Online Banking Report.