Under the banner “One app to rule them all” Numbrs AG announced this week that they had picked up an additional $3.8 million from parent company, Centralway.

The capital infusion takes the total funding for the mobile-first banking app spinoff to more than $11 million. The funding is earmarked to help suppoprt Numbrs’ launch in the United States, slated for early 2014.

Switzerland-based Numbrs aggregates all a user’s financial accounts into one app. The multi-banking app gives consumers access to all of their accounts from any location, allowing them to pay bills and conduct other financial transactions such as money transfers. 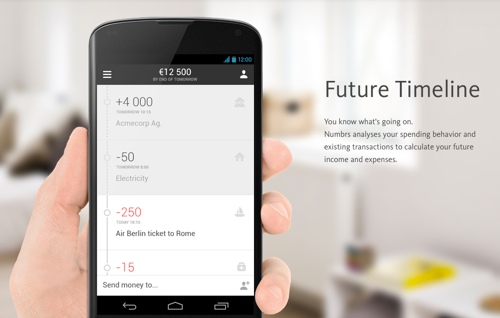 The app also includes a feature called the “Future Timeline” which provides an overview of likely future transactions based on past spending. This feature helps users better understand, anticipate, and manage their cash flow.
Founded in 2012, Numbrs has been available in Germany since August of this year. As reported in TechCrunch, the company is opening a New York office in preparation for its U.S. launch, and has reaffirmed plans to expand into the United Kingdom later this year, as well.
Numbrs demoed its technology at FinovateFall 2013 in New York. Our Live Blog post of their presentation is available here.