About 100+ folks gathered in the brand new M Resort near Las Vegas for the third annual Mobile Commerce Summit by SourceMedia. Jeff Dennes from USAA and Jim Simpson from City Bank of Texas, both provided an extraordinary amount of metrics on their mobile rollouts (details below).

The biggest innovation of the day was iPhone-enabled remote check-deposit capture soon to be available from USAA (official launch June 25; see picture below). 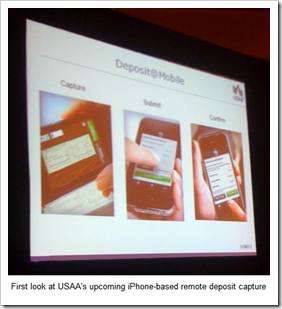