Just as we are putting the finishing touches on our latest Online Banking Report, which looks at the intersection of personal finance and social networks, a new person-to-person lender launches. And how do they plan to gain traction? Through tight integration with Facebook, the second-largest social network. So we are holding the presses, and adding this important new development to our upcoming report.

We'll have much more on it later, but if you are curious now, login to Facebook and check out Lending Club (the easiest way is to login via the link at the top of the Lending Club homepage). Or read Colin Henderson's great analysis here.

Last year, Facebook developers created a proof-of-concept personal finance app, originally called Facebank, then changed to MoochSpot (see previous coverage here). That effort was designed to show how third parties could leverage the Facebook API to create new services. It didn't take long for someone to take the bait. Within a few weeks, BillMonk created an interface to Facebook to support their expensing tracking service, now owned by Obopay. Buxfer also supports login via Facebook's username/password (post here), but does not link into the social network as yet.

But Lending Club is the first to leverage the Facebook interface to support actual financial transactions, in this case lending/borrowing. The company is modeled after Prosper. Lending Club timed its launch to coincide with the Facebook developer's meeting and launch of Facebook Platform.

We'll be testing it during the next few days and will report back on whether its a challenge to mainstream lending, or merely blog fodder. Given the rising power of social networks, my guess is the former. 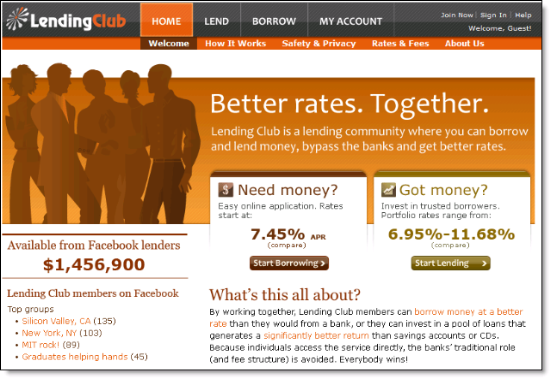 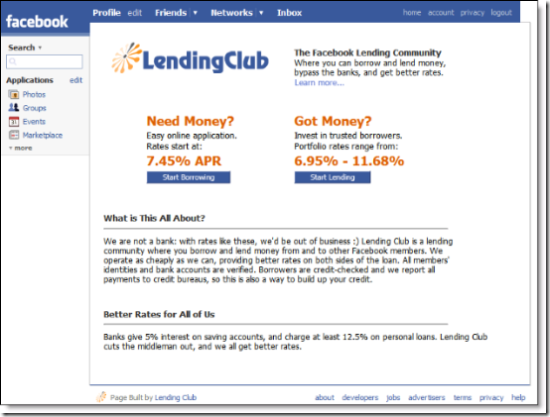