It's been six months since the last direct bank launch, Provident Direct (coverage here). The latest entry is OnBank from M&T Bank, a $66 billion bank based in Buffalo, NY.

OnBank passes our strict 25-word homepage standard, joining ING Direct, EmigrantDirect on the short list of financial institutions with Google-like clarity on their home page. It takes just a few seconds to know that this is a place to get a high rate of interest on your money, but you should look elsewhere for a commercial loan.

The user has just two main choices of what to do next (screenshots below):

The only thing missing is a comparison to other banks. Given that it's one of the highest savings rates available right now, OnBank should be aggressively showing how it compares to key online rivals, including ING Direct's 3%.

Not only is the bank direct and to the point in its copywriting, it also uses simple, effective graphics, including a gimmick sure to gain attention. To reinforce its 24/7 "always on" branding, OnBank takes a page from the iPhone weather forecast interface, showing the current time in reverse lettering in front of a background image that changes to match the time of day. As you can see in the three screenshots below: daylight (4:42 PM), sun setting (8:58 PM), and nighttime (9:02 PM). Presumably they also have a sunrise background. The bank displays the time according to the user's machine, PDT in my case.

We didn't test the Metavante-powered online application all the way through, but it looked relatively straightforward, although graphically not as appealing as the other OnBank pages.

Thanks to Bank Deals for the find. 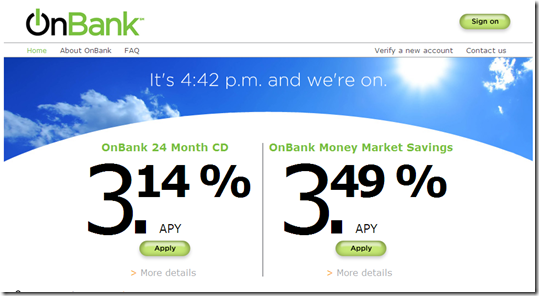 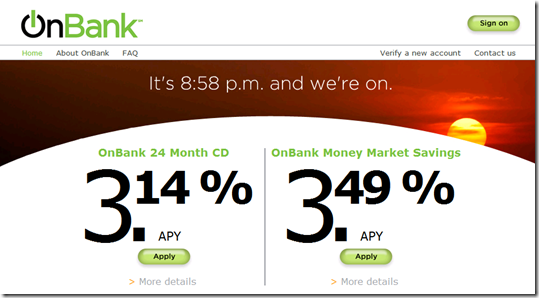 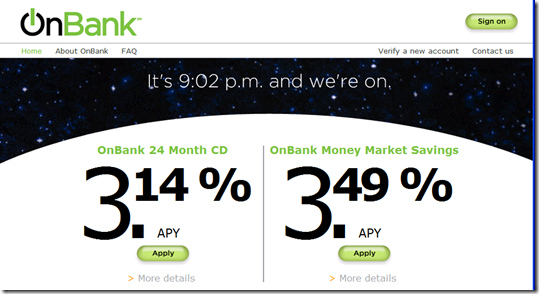 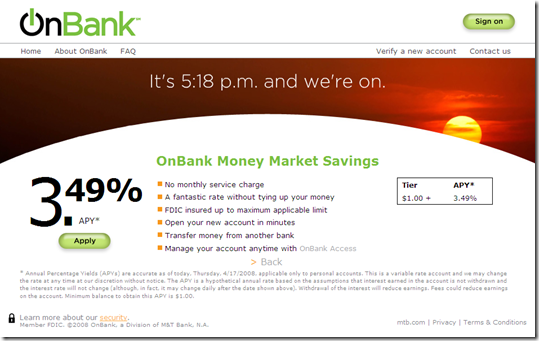