When I first began writing about online banking in 1995, there were many unknowns. But by the late 1990s, most people were pretty sure of three things:

Most of this vision has come to pass. The only holdout is bill/statement delivery, which has remained stubbornly paper-based, despite a decade of trying to coerce consumers to do without the paper security blanket. 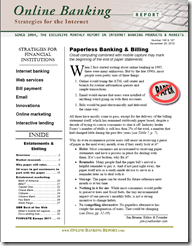 Paper bills and statements are an enormous waste of resources, costing $40 billion or more annually in paper and postage. Plus, there’s all the time customers spend storing, sorting, and rummaging through paper statements. And there’s the tens of thousands of calls to customer service that could have been avoided with better organization.

But consumers will continue to cling to the paper until there are:

A.) Clearly better alternatives
and/or
B.) Tangible incentives to turn off the paper

Both of these themes are addressed in the latest Online Banking Report (link). Financial institutions, situated at the intersection of the bill and the payment, are in a great position to drive paper out of the system. But so far, it’s not happening as fast as it should.

Doxo, which launched an ebilling hub last month, could be the catalyst for change, at least on the billing side. It’s encouraging to see two billing innovators, Sprint and Kansas City Power & Light teaming with the startup, even before the service gets out of private beta (see previous posts).

So what can you do to take part in the inevitable movement away from paper? Read our latest report for 34 ways to convince customers to part ways with paper.

Cost: No extra charge for OBR subscribers, $495 for others here