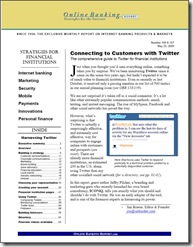 We just uploaded our latest Online Banking Report.
It will be mailed to subscribers next week. It’s also available online here. There’s no charge for current subscribers; others may access it immediately
for US$595.

Twitter is everywhere these days (note 1). Those who use it think it’s the best thing since the invention of email. Those who don’t, think it’s just another Internet fad, enjoying its 15 minutes of fame before flaming out with only a Wikipedia entry to remember it by.

The reality: No one knows exactly how it will play out, but it’s something likely in between those two extremes.

We are not surprised Twitter has taken off as a social connector. It’s a lot like other extremely popular communication methods: email, texting, and instant messaging. The rise of MySpace, Facebook and other social networks has paved the way. 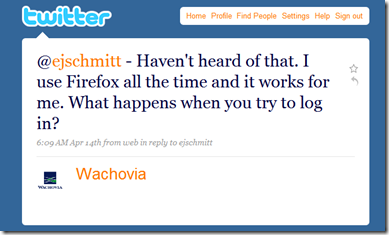 However, what’s surprising is that Twitter is actually a surprisingly effective, and extremely cost-effective, way for companies to engage online with customers and prospects (see Wachovia example in the inset).

Numbering more than 200 in the United States alone, there are already more financial institutions using Twitter than any other so-called social network. Most have started in the last month or two (see previous coverage).

In this report (abstract), guest author Jeffry Pilcher (note 2), a branding and marketing guru who recently launched his own brand consultancy, ICONiQ, tells you exactly what you should and shouldn’t do with Twitter. He was an early adopter of the tool, and an expert on harnessing its power.

Notes:
1. USA Today even had a story on the front of the Money section two weeks ago, entitled, “Banks try social networking, jump on Twitter wagon“

2. Jeffry Pilcher blogs at The Financial Brand and frequently tweets here. He maintains a comprehensive listing of banks and credit unions on Twitter here.