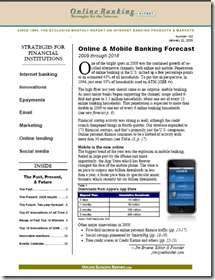 The latest Online Banking Report: 2009 to 2018 Online & Mobile Banking Forecast is now available. It was mailed yesterday to subscribers. It’s also available online here. There’s no charge for current subscribers; others may access it immediately for US$495.

The report includes our latest 10-year online banking and bill pay forecast. This year we again bumped our long-term usage forecast to 6%, up from 3%, to reflect a more robust outlook for adoption, primarily from mobile-only users. For example, we are now projecting 71 million U.S. households banking and/or paying bills online by 2013 compared to last year’s forecast predicting 66 million for the same period.

Mobile banking (see note 1) access is included in the overall online banking numbers, but it’s also shown as a separate line item. Based on the new open-platform standards ushered in by the iPhone and App Store, we increased both our short- and long-term adoption forecast by 10% to 20%. For example, by year-end 2011 we now predict there will be 18 million U.S. mobile banking households. A year ago we forecasted 16 million.

We also included a revised forecast for U.S. peer-to-peer lending. We cut back our short-term estimates by more than 50% due to regulatory and economic constraints on the business. A full 10-year forecast is included in the report.

Top ten innovations & trends of 2008
The report also includes a summary of the top ten innovations of the past year including the surge in mobile banking demand and the marked increase in traffic to personal finance speciality sites such as Mint and SmartyPig.

Note:
1. A mobile banking household is one where someone has used a mobile device to access bank or credit card account info within the past six months. Includes text-based queries, but not simple broadcast alerts.