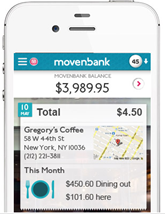 Tech startups help define the future in many traditional industries. Amazon in books, Expedia in travel, Tesla in automobiles.

But there’s been less disruption in retail banking than most industries, especially in the U.S. We saw ING Direct take some share in savings accounts, but not enough to really shake up the status quo.

But we have some new players looking to change that and Movenbank is one of the most interesting. The Brett King-founded startup, armed with $2.4 mil in seed funding, is beginning to release more details as it prepares for its launch at our FinovateEurope event in two weeks.

In an email to customers today, the startup provided a few peeks at its Geezeo-powered PFM interface (screenshot below):

In addition, the "how it works" section shows a MasterCard PayPass sticker used for contactless payments (inset).

Movenbank interface (from customer email, 28 Jan 2013)
Note: "Spend | Save | Live" navigation across top.
This appears to be a PC user interface, but it could be a tablet UI.