CD laddering is a great way to increase yield without sacrificing liquidity. Sophisticated savers have used the strategy, often at the suggestion of personal or private bankers. It’s not rocket science, but it takes a bit more planning.

It’s a trivial bit of logic to program a ladder tool into a computer or website, so it’s surprising that it’s rarely featured on banking sites (note 1). That may be because most financial institutions have dozens of product lines to nurture, and it’s difficult to justify the resources for speciality features.

That’s just the kind of thinking that creates market opportunities for startups like MoneyAisle from neoSaej. The Boston-area company, which made its public debut at Finovate 2008 (demo video here), is totally focused on deposits and can justify the investment in advanced features. In fact, their livelihood depends on it.

So it makes sense they’d be first to market with an automated CD-laddering tool. But what makes it especially impressive is that MoneyAisle users can run up to 30 simultaneous auctions placing funds in up to 30 different financial institutions (see note 2).

In our test of a relatively simple, but typical, four-rung ladder (see below), four different financial institutions won the bidding:

And by distributing our funds into four different maturities, 3-month, 6-month, 9-month, and 12-month, we were able to increase the yield by 0.36% compared to putting it all into 3-month certificates. And we are still able to withdraw 25% of our funds every 3 months without penalty. To further increase yield, the shorter-term CDs could be reinvested into longer-term CDs at maturity, e.g., each CD could be rolled into one-year CDs at maturity to create a ladder of four 12-month CDs with one maturing every 3 months.

Advanced option: The advanced ladder is designed for users that want to spread their deposits around. The money designated for each CD maturity can be spread to two or three different banks if desired. Users may also choose up to 10 banks they want excluded from the bidding. 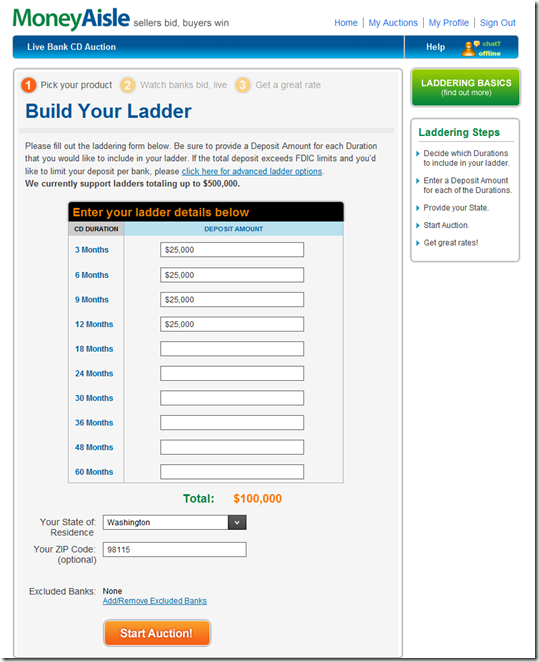 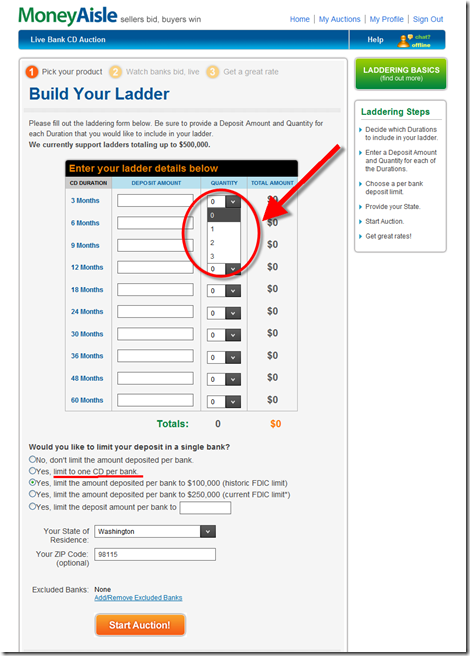 Notes:
1. Bank of America has a Java-based laddering calculator here as does Citizens Bank (here) and Safe Credit Union (here).

2. The maximum number of simultaneous auctions in the simple ladder program (shown above) is 10.

3. For more information on MoneyAisle and other new lead-gen programs, see our Online Banking Report on Lead Generation and our recent report on Growing Your Deposits Online.