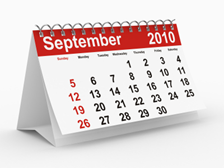 I love September. When I was a kid it was the excitement of going back to school, a new football season, wonderful Midwest weather, plus my birthday to boot.

Nowadays the birthday isn’t so much fun, but the weather is still fine and it’s like Christmas for new tech products. I can’t prove it, but I bet there are more major product announcements in Sep/Oct/Nov than the rest of the year combined.

This month already, 70 new tech products launched at DEMO last week, and several dozen will debut at TechCrunch Disrupt next week. Then, of course, we have 56 new financial launches at Finovate, Oct 4/5 (which unfortunately is sold out).

Today alone, there were at least six new things I would have liked to blog about. Maybe I can get some of them into my Twitter feed at least. I have chosen the one that was the biggest “aha” moment of the day. The seemingly off topic, but oh-so-cool service, that can turn any mobile phone, yes even those low-end freebies, into an electronic hotel room key. And without any additional hardware/case/SIM/SD card or anything. It’s like magic. Watch.

They use sound to engage the lock. Aha! Would I trust the thing? Probably not, but I’d use it anyway. The key benefit (pun intended) is that you get to bypass the endless lobby check-in queue when you arrive at the hotel and simply proceed directly to your room. For that, I’d take the risk that it didn’t work. Besides, four times in my life I’ve been given a key card at the front desk that opened up on a room already occupied (see note 1), so this system can’t be any worse.

The system, called MobileKey, is being piloted for the next three months at a Holiday Inn in Chicago and Houston. It’s powered by OpenWays. When using the service, the hotel sends the guest a text message with a link that plays a unique sound that opens the door. Brilliant!

Relevance: When your phone becomes your Starbucks card, then your airline boarding pass, and now your hotel room key, it’s only a matter of time before it becomes a mobile wallet, not only controlling your bank accounts, but also used at the point of sale for purchases.

Notes:
1. Does this happen to everyone or am I just cursed? At least three times the door was not deadbolted from inside, so I actually went partway in to the room. Once I was politely told to go away, once I was screamed at by a fellow whom I’d awakened after midnight, once the occupant was in the shower so I quickly backed out, and the fourth time there were dishes out front so I called the front desk first. Anyway, I always knock before going into my room the first time.
2. HT ReadWriteWeb