We’ve used Square to accept payments at Finovate events for two years and have had an overall good experience. And recently, when our name-brand merchant acquirer of 17 years partially shut off our account for giving them too much risk-free business (a subject for another post, once I calm down), Square saved us by happily accepting our CNP volume with its fat 3.5% fee.

But this post is about the other side of Square’s two-sided market, its mobile wallet for consumers. I’ve already written about Square’s gift card option launched right before the holidays, but I hadn’t used the wallet for day-to-day charges. 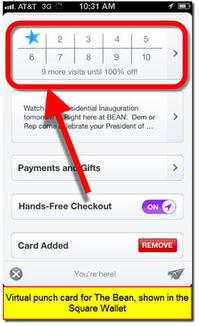 Here’s why Square is better than plastic. And it’s not because you can pay with your name, which is nice, but a little unsettling for both customer and clerk. It’s the built-in rewards. And to a lesser extent, stored receipts/records (can you say PFM?)

We Americans are absolutely enamored with getting something for free. In total, we’ve joined more than a half-billion rewards programs (see inset, note 2). And it crosses all demographics. Have you seen how the billionaires’ eyes light up on Shark Tank whenever someone offers them a free cupcake or cup of frozen yogurt?

But we’re also lazy busy and few people want to carry a wad of punch cards around in their wallet/purse to earn rewards at local retailers. Plus, the cards are mixed blessing for merchants. The loyalty is nice, but merchants are mostly giving free stuff to regulars who would pay for it anyway. Paper punch cards just don’t do enough to convert people into “new” regulars. 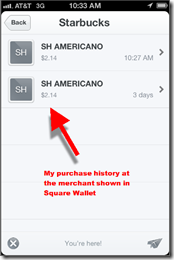 This is where Square shines. When you use its wallet, a virtual punch card is automatically started for you (note 3). And when enabled, the next time you are near the merchant, Square will automatically remind you (via popup message) to come back and buy from that merchant. And even if it’s six months later, you get a second punch on that virtual card. And if all goes well for the merchant, they have incremental sales and you are well on your way to a complimentary mocha.

And all your previous transactions, with full itemized receipts, are available within the Square app (see left). It’s truly the future of payments available for a sneak peek today. I highly recommend giving the Square Wallet a try.

1. It’s also hard for consumers to answer questions about something they don’t really understand. It’s like asking someone in 1997 if they’d like to have their music purchases stored “in the cloud.”  10% would say sure, 10% would say I don’t know and the remaining 80% would choose the other options at random (but 100% would say WTF to themselves).
2. See our report on card-linked offers (Feb. 2011, subscription).
3. Starbucks does not currently support loyalty options via Square, but they are coming. Starbucks has $25 million invested, so they want Square to shine.