Usually, it’s the big ideas that get all the press. Last week alone, Microsoft launched a new search engine (Bing), Google announced a new way to communicate (Google Wave), and Facebook began rolling out an alt-payment service to its 200 million users.

Those have intriguing long-term ramifications, but can they save you money today?

Here’s something a little more pragmatic: A tool that promises to make it easy to challenge your tax assessment, potentially saving hundreds or thousands of dollars annually. Enter LowerMyAssessment.com (LMA).

I saw a few screenshots of the service during the company’s application to debut at FinovateStartup 2009 last month (demo video here). But I couldn’t use the service until a few weeks ago. 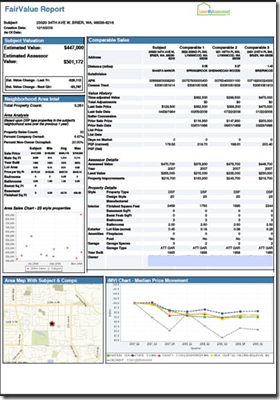 The company then makes the simple math calculation and informs users if the value of their home is under the tax-assessed value. If it is, LMA provides forms and instructions to challenge tax assessments with the local assessor’s office.

In our test case, using an address in Seattle, one of 10 states currently served by LMA, we were told that its assessed value was $300,000 more than the market value (note 2). LMA encouraged me to register and let them help me challenge that assessment.

Registered users complete an online form with info needed to challenge their assessment (see screenshot 3 below). After completing that form, users must pay $125 to complete the challenge process and receive their FairValue Report (shown above).

Analysis
While the cost-saving potential is significant, the challenge for LMA is getting consumers to shell out $125 for something they can conceivably do themselves (note 3). It took us just a few minutes using Google to uncover the challenge forms and procedures at the King County website. And market value estimates can be pulled from Zillow and its competitors.

To reduce sticker shock, the company recently removed the big $125 price tag from its homepage (see screenshot 1) and is now emphasizing the free lookup feature (screenshot 2). I can understand downplaying a three-figure fee, especially online. But now they’ve gone too far the other way. I cannot find the price of the service anywhere on the website. It wasn’t disclosed until I completed my registration and filled out the challenge form (see screenshot 4 below).

There’s also the small matter of getting the word out. The major market opportunity will largely be gone once home prices get back to their pre-recession levels, even though there will always be cases where consumers feel their assessment is unfair. But LMA needs to team with major financial or real estate firms as soon as possible to reach large groups of potential customers.

Bank and credit union opportunities
As discussed in previous posts, direct fee income is scarce in online banking, at least in the United States. Aside from credit bureau monitoring, there are few up-front fees that consumers are willing to pay. Certainly, banks earn billions from the underlying checking, debit, and credit card accounts, but nothing from the value added online.

It’s possible the service could be replicated by a bank or mortgage provider using available APIs from Zillow or others. But for most banks, it would be far simpler to outsource the service to LMA or other specialists.

If the service were sold for $100+, with revenue shared 50/50, a bank or credit union could earn a respectable profit while providing a unique and free service to customers; however, the folks at City Hall may not be so appreciative. If city government is a big customer, you might tread carefully here. 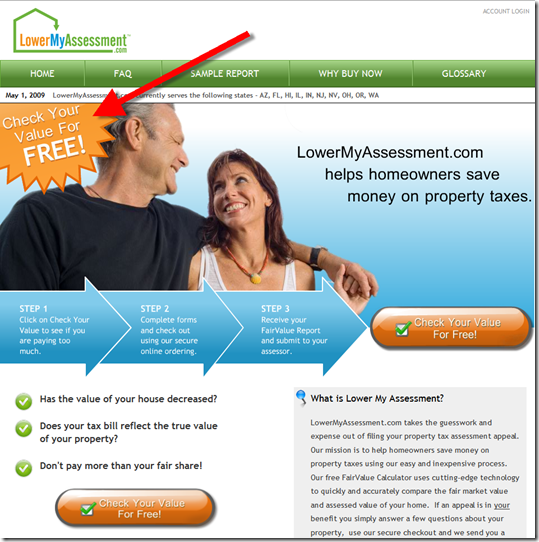 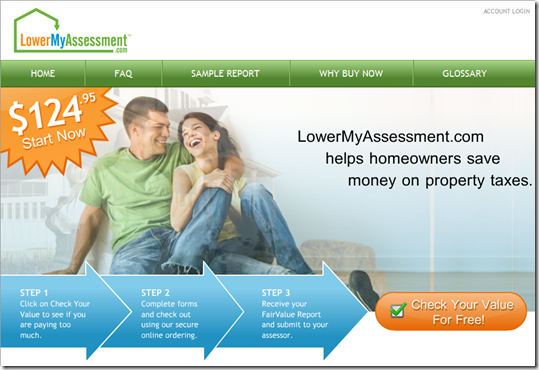 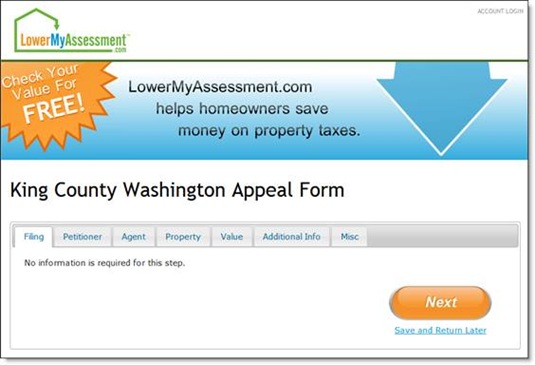 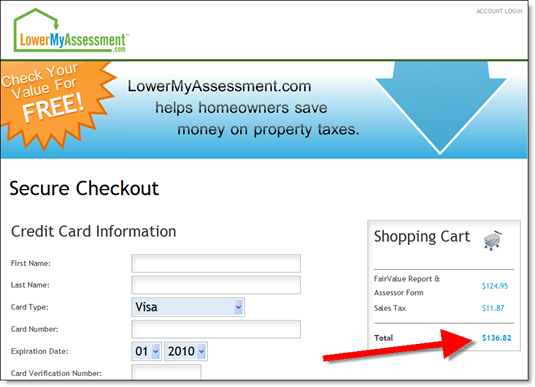 Notes:
1. States currently covered: Arizona, Florida, Hawaii, Illinois, Indiana, New Jersey, Ohio, Oregon, Washington
2. That was on May 11. Now, three weeks later, LMA shows the house having declined another 20%. Home prices are certainly fluctuating, but n
ot that much. It appears that LMA has switched to using Zillow’s low estimate instead of the mid-range one. That may help sell more services, but it’s a bit misleading. It would be much better to show the range of potential market values pulling data from all three third-party valuation sites, in much the way RedFin does.
3. They also have some work to do in clarifying the buying process. It’s not really clear exactly what you are buying at checkout. Are you submitting a property-tax challenge at that point? What about the FairValue Report? When do you see that? But we’ll cut them slack on that since they just launched a few weeks ago.