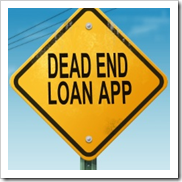 If you’ve ever worked at a financial institution, you’ve no doubt heard the often-true horror stories from the loan department. You know the ones, where senator so-and-so’s spouse or the CEO’s brother were turned down for a car loan (see note 1).

The problem with automated loan systems is that there is no human doing a reality check on denied applications. Was it really a deadbeat applying or did someone just make a mistake on the application form? You can bet if a senator’s spouse had applied for the loan in person the loan officer would have picked up some clues that maybe this app deserved some extra scrutiny.

But the flip side to human involvement is discrimination, whether intentional or not. A huge benefit to automated loan decisioning is the virtual elimination of certain biases from the process. Computer algorithms only evaluate the factors they’ve been told to look at. Nothing more. Nothing less.

And because computer analysis has put more science into the underwriting process (notwithstanding the recent housing bubble), most people agree that it’s generally been good for the bank and (most) consumers. But even the best system will generate a certain number of false negatives leading to the occasional embarrassing decline.

So it’s worth considering installing a second-look system in your online process, providing wrongly denied applicants another chance at proving themselves worthy, before they end up embarrassing your CEO at their next family gathering.

And why might I be thinking these thoughts? Yesterday, I went online to accept the direct mail offer from a major credit card issuer who’s sent me more than 100 solicitations over the past decade (note 2). And I was flat-out rejected. Either I fell victim to a false negative or the issuer’s underwriting is not in sync with their marketing.

The application process = great
The online acceptance process itself was flawless. I typed in my registration code, answered a few questions, and hit enter. It had taken about 3 minutes up to that point. Then wham! Twenty-four seconds later, the application was denied (note 3).

The rejection process = sucks
And even though I could live without the card (note 4), it’s frustrating and disappointing to be turned down flat with no recourse. Especially after being aggressively solicited for years.

And the company pretty much disowns you after the bad news. The website returns a two-sentence rejection thanking you for your interest, saying that they couldn’t approve the request, and that they’ll followup in writing in a couple weeks explaining their reasoning. And BTW, please don’t apply again for at least 45 days. No apology. No email. No phone (or even email) to contact for more info. No referral to the credit bureaus or other resources. Just a simple, cold brush-off.

So I went back to the direct mail letter and called the number listed there. The bank rep said there was no way to look at the app I’d entered minutes earlier to see why it was denied. All he could do was take another new app, but he warned that the system wouldn’t like seeing multiple apps and would likely reject it again.

Recommendations: You cannot avoid making credit denials, lots of them. And you can’t avoid the occasional false negative. But you can, and should, create a way for online applicants to ask for a second look, and perhaps correct any errors that they might have made. And if you can’t do that, at least be compassionate with the immediate messaging and try to offer some helpful resources.

1. Thank the applicant and apologize for not meeting their needs. Say this both on the website and in a followup email.

2. Explain that although you’re not perfect, there appears to be circumstances in the application that preclude you from offering credit at this time. Refer them to Credit Karma, Quizzle, or other credit resources to view their credit score and learn more.

3. Provide a second-chance option either through email or telephone for applicants with strong credit to ask for a human review.

Optional: For customers you must turn down now, but who you think might be good future prospects for loans and/or other products, or who are already profitable existing customers, consider sending a consolation prize: $5 statement credit, a Starbucks card, two-for-one movie certificate, etc.

Second-look apps would need a higher level of scrutiny to ensure against those trying to game the system. But there will likely be some gems uncovered in the process.

Notes:
1. My favorite personal story of botched celebrity banking happened at First Interstate Bank of Washington where I worked in the late 1980s. Bill Gates, whose mom was on our board, supposedly used what was then our “state-of-the-art” telephone bill-payment service. Apparently, we didn’t send off his mortgage payment and the late fee we ate was more revenue than the entire bill-pay program generated in a month. It happened a few months before I started working there, so I can’t vouch 100% for its accuracy. But I can tell you it was a popular story within the bank with a “failed tech” angle and a juicy tidbit about the outlandish size of the mortgage on the Gates property.
2. This is a rare situation where I’m not naming the company in a public blogpost because a credit denial is such an individual thing. It doesn’t seem fair to single them out for one incident which is most likely not indicative of the normal experience there. However, I will disclose the name on an individual basis if you email me and promise not to post it publicly.
3. I’m not sure what went wrong with the application. I have several decades of excellent credit, zero inquiries in the past 6 months, reasonable debt-to-income, and a decent level of household income. And I checked all three bureaus recently and everything was fine. However, the bureaus do have inconsistent, and partially incorrect, info about my employment history. But the application did not ask for employer name, so I don’t see how that could have sunk it.
4. I actually planned to use the card frequently; it had better terms than the one I was hoping to replace.