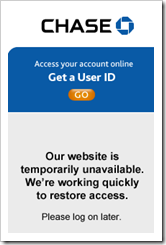 For much of Tuesday (see note 1), Chase Bank had a message in the upper left corner of its website saying that the website was temporarily unavailable “due to scheduled system maintenance” (screenshot here). Later in the day, the bank finally took that excuse down and merely said that the site is “temporarily unavailable” (see screenshot below and inset).

The outage appears to have afflicted iPhone app users as well. I tried several times and was not able to connect. But, unfortunately, and here’s a new downside for an app compared to a website, there is no way for the bank to warn users within the app that there’s a back-end problem. So users just tried and tried to connect.

Interestingly, text banking seemed to continue working, at least on the card side. During the outage I was able to retrieve the current balance and available credit via a text message to the bank’s shortcode. That could be an interesting side benefit to text banking, “works if the website is down.”

Lessons for Netbankers: There’s no way to avoid the occasional tech glitch. The important thing is how you handle it. Today’s salient lessons reveal how to communicate during downtime, scheduled or otherwise.

1. Homepage warning: The message on the website is crucial, and Chase does an okay job prominently posting a concise warning on the homepage. Sure, the bank could have been more specific, but when you are in the middle of an IT crisis, there often isn’t a whole lot more that can be said. Still, they were tardy in pulling the “scheduled maintenance” excuse down.

2. Referrals to other channels: Some of the press reports quoted a Chase spokesperson referring users to the toll-free number as well as ATMs and branches where the systems were apparently working fine. The bank’s website message should also have made those recommendations. Even if live operator support was hopelessly backed up, the bank should admit that and encourage customers to call the toll-free number to check balances and other activity.

3. Apologize and reassure: From crisis management 101: apologize first, then reassure customers and tell them what you are doing to fix the problem. Chase was doing little of that from what I can see. There was no apology. There was no real explanation. And there was no reassurance that your money was safe. The information void was left to be filled with tweets and blog-post speculation. (15 Sep update: When I logged in today for the first time since the outage, there was no mention of the problem. And oddly, my last login showed as having happened during the middle of the outage. I’m trying to figure out how that could be; perhaps from my attempted iPhone app login?)

Chase website grade = Incomplete (I’m sure it’s coming, but it should have been visible today.)

4. Communications to mobile customers: If the mobile app is also down, you need to proactively send a message to app users explaining the situation. Conversely, if the mobile app or text messaging is working, refer Web customers to those channels.

All in all, a bad day for Chase online banking. But a good learning opportunity for everyone else. 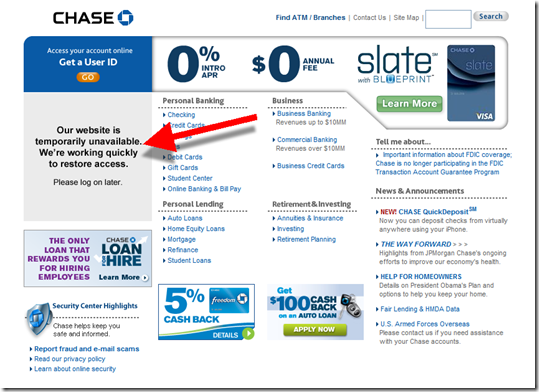 Note:
1. According to various Twitter messages, Chase online banking went down at about 10 PM Eastern time on Monday, 13 Sep and came back online a few minutes ago (1:45 AM Eastern, 15 Sep, Wed.), a little under 28 hours.