Peer-to-peer lender, Lending Club, announced today that it is expanding into small business lending. The company will provide 1 to 5 year loans of between $15,000 and $100,000, starting at a fixed rate of 5.9%.

Does this make them P2P2B?

In an interview with CNN Money/Fortune, Lending Club CEO Renaud Laplanche said that the move was a matter of meeting a need that had gone unmet in the wake of the 2008 financial crisis. “Over the last couple years, the larger commercial loan market has picked up again,” he said. “If you look at smaller commercial loans, that market has continued to shrink since 2008.”

“It’s not for lack of demand. There are a lot of business owners who don’t have the capital to grow their businesses.” 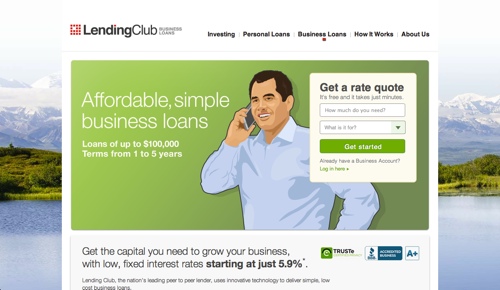 Laplanche suggested that the market for lending to small businesses “is not all that crowded.” But the new initiative is a shot across the bow for those currently in the sailing in the small business lending space such as CAN Capital, Kabbage, OnDeck, and even PayPal.
Adding small business loans is part of Lending Club’s larger project to add additional credit products, from auto loans to home mortgages. The company’s new small business loans initially will only be available for investment by institutional investors. Lending Club will consider giving retail investors access to these loans in the future, after reviewing repayment and default rate data.
A few key metrics on Lending Club.
A long time Finovate alum (Startup 2009), Lending Club was founded in October 2006. The San Francisco, California-based company includes Foundation Capital, Google Capital, and Kleiner Perkins Caufield & Byers among its most recent investors, and was ranked #5 on Forbes’ Most Promising Companies list for 2014.