I’ve been looking forward to the day when financial companies would begin to leverage mobile phone location to fight payments fraud. That day has arrived with the launch of Finsphere’s PinPoint which began its private beta a few hours ago. We have 100 invite codes if you want to test the service free of charge (enter “Finovate” in the Promotional Code box on the signup page).

PinPoint is a subscription-based alert service that runs on top of online banking. Using Yodlee’s aggregation technology, PinPoint monitors all of the user’s card-based transactions, and sends email and text alerts on potentially fraudulent transactions based on a number of factors, one of which is the consumer’s physical location as indicated by the location of their mobile phone. Pricing has not been finalized.

The service competes with aggregated alerts from OFM’s such as Mint.com or Strands. But PinPoint’s main competition is the card issuers themselves. The service holds several potential advantages compared to financial institution services (note 1):

The startup also plans to connect the service to credit bureau data where it will compete with the credit monitoring players such as Experian, TransUnion, Equifax, Intersections and others (note 2). The demo videos show a mobile app, but that’s not part of the initial release.

Finsphere is a Seattle-based startup that’s been operating in stealth mode since 2007. The company has raised nearly $20 million in two rounds from Bezos Expeditions, Mohr Davidow Ventures, Shasta Ventures, and Frazier Technology Ventures. The CEO and co-founder is Mike Buhrmann, a serial entrepreneur in the wireless/mobile space who originally worked at McCaw/AT&T. President Robert Boxberger is a former Wamu/Providian card exec (note 3).

Until today, press reports have been limited to reports of its first two rounds of venture funding (see previous Netbanker post). The company had developed a broad range of patented technologies dealing with location-based fraud tools. In addition to the consumer service launched today, the company has its eye on enterprise fraud-management tools. 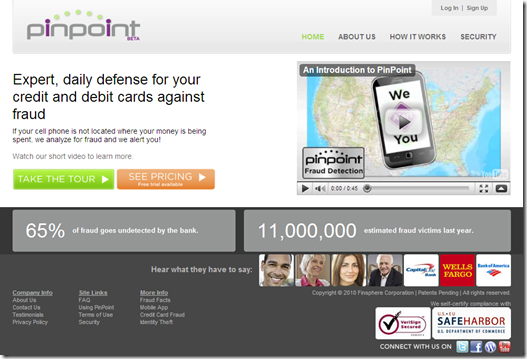 Activation screen
Users must confirm email address and mobile phone, then add one or more cards 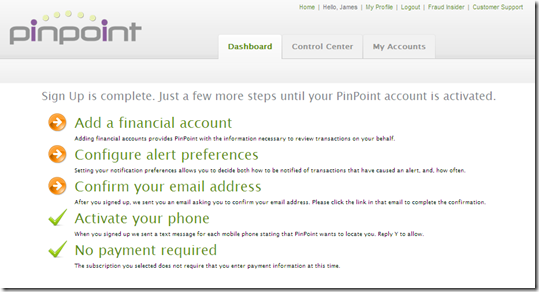 Alert preferences
Users establish dollar thresholds for alerts, whether they want text and/or email delivery, and how often they want to receive then (daily or weekly) 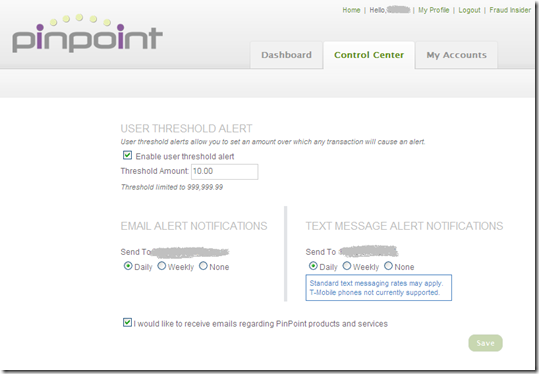 Notes:
1. For more information on alerts, see the most recent Online Banking Report: Transaction Alerts & Streaming.
2. For more information, see Online Banking Report: Credit & Fraud Monitoring Services (August 2007).
3. Check out the company’s About page, where five top execs introduce themselves and provide a 60-90 second overview of the features and benefits of the service. A very good use of video.