Manilla, a new account aggregation service from Hearst Corporation, launched today at Demo. Here’s the official announcement and its demo video is embedded below.

Manilla currently aggregates accounts in four categories (more are on the way):

In the first screenshot below, I’ve added an account in the finance category (American Express, which is shown as pending) and one in the travel section (American Airlines, which displayed the account balance immediately). I have yet to add a household bill or a magazine subscription.

In the second screenshot, you can see what it will look like after the account has been populated with many accounts (this is an example directly from the Manilla website).

The service will not show third-party advertising. Like Doxo, it will display marketing messages only from participating billers. And also like Doxo, billers will pay the freight, sending the company a small fee for each electronic bill it sends through Manilla (more on its business model here).

Analysis
As I’ve mentioned in several posts about Doxo, there is a huge need for a secure, easy-to-use hub to help households organize their bills and statements. While Doxo is currently focused on delivering bills only from participating billers, Manilla allows users to aggregate bills and statements from virtually anyone supported by its Yodlee-powered aggregation engine.

So, if you are willing to sit down and enter usernames and passwords, the service can begin delivering value immediately. Consumers have been reluctant to do that unless they trust the company. But with Hearst Corp. backing it and with the credibility of two major billing partners, Comcast and Citibank, Manilla may be able to get over the trust hurdle. 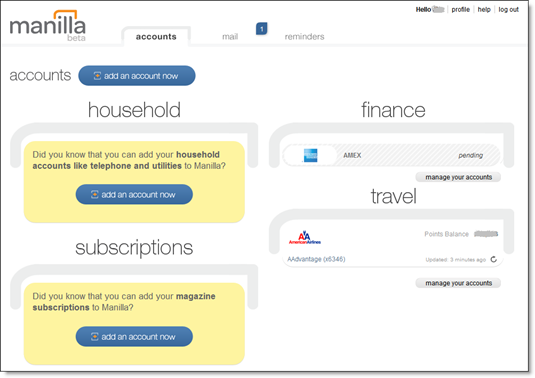 2. Manilla homepage after the user has set up accounts
Note: The icons are for bills, statements, notices and offers