Product Hunt is the newest website catering to tech enthusiasts. Each day 40 to 50 new products or new product features are featured on the site. Anyone who has registered is allowed to upvote any of the submissions and a continually updated leaderboard surfaces the hottest products of the day. Then at midnight, the whole thing resets, and 40 to 50 more products get their 24 hours of fame. I’ve been following it for a few months and have seen that while only two or three fintech entries appear each week, they tend to be popular (which could be a function of their scarcity). But rarely, if ever, do they climb to the top. And this week, not one, but two companies have dominated their day on Product Hunt.

On Tuesday, the Plastc Card (yes, spell check, no “i”) garnered 545 votes, almost 200 more than runner-up Student Developer Pack. Plastc is similar to Coin, a computerized credit card that can hold multiple mag-stripe cards in a single piece of plastic, planning to ship to pre-order backers in the first half of 2015. Plastc holds more cards, has an e-Ink display, and at $169, costs more than three times the pre-order price of Coin.

On Wednesday, fintech ruled Product Hunt again, with new security-minded credit card Final gaining more than 900 upvotes, 600 more than the next-closest newcomer, Clearbit. I believe it’s the record for a financial product, eclipsing Plastc’s from the day before. 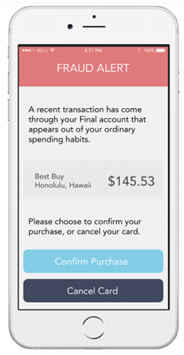 What is Final?
Final is a standard mag-stripe (and chip) credit card with a companion mobile app and desktop dashboard. The card is upping the security ante by incorporating easy-to-use disposable (aka temporary) card numbers for ecommerce (card not present). It allows users to designate a unique number for every online merchant, that way it’s easy to shut that merchant off, if you don’t want them to be able to charge your card again. Users can also set transaction limits by merchants to make sure there are no overcharges.

Final also plans to offer advanced controls for brick and mortar purchases. Purchases could be allowed at only certain merchant categories, for example. And Final’s card will be able to be tethered to your smartphone allowing chip-and-pin purchases only when the two are in close proximity to each other.

The card-management app features PFM features not unlike what Moven and Simple offer today. But there is more emphasis on fraud controls and ridding yourself of “gray charges” ala BillGuard (see inset). In fact, the best way to think of Final is a credit card version of a Moven/BillGuard mashup. It is to credit cards what Simple was to checking accounts. A winning combination of good design, consumer advocacy and a bit of tech flair.

The startup is still looking for a credit card issuer-partner (attention Capital One, this could be your 360 credit card), so pricing is not available. However, CEO Matt Rothstein told me yesterday that they plan to make the card fee-free. In fact, they are looking at the business as much more than just a security play. They are focused on consumer advocacy and helping consumers reign in their spending (see first screenshot).

Final Thoughts
Final is part of the current batch at TechStars Boulder and is pitching at its Demo Day today. The company has 2,200 people on its waitlist (Update: As of noon Pacific on 10 Oct 2014, the number has jumped to more than 21,000). Not a bad first-24-hours out of stealth. There is clearly consumer demand for more card controls, to avoid outright fraud, fight merchant overcharges and reign in overspending.

Most of the newcomers that have gone down this path have used prepaid debit cards and/or account aggregation. We haven’t seen an ambitious startup credit card play since well before the 2008 meltdown. Final will benefit from substantially higher interchange (albeit shared with its partner), but will also have to deal with rejecting the credit applications from a significant portion of its waitlist. That will not be easy to explain to the early adopter crowd, who will likely take their case to social media (note 1).

But overall, I’m a big fan of what they are trying to do, and expect to be following Final for a long time, unless they get swooped up by a large issuer right out of the gate. 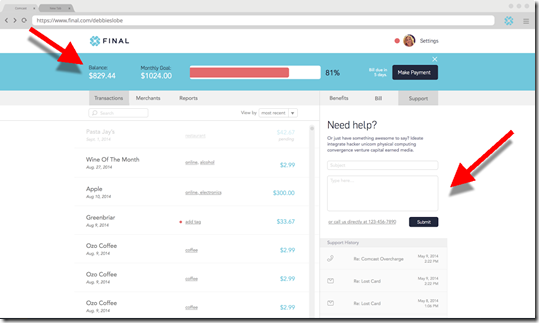 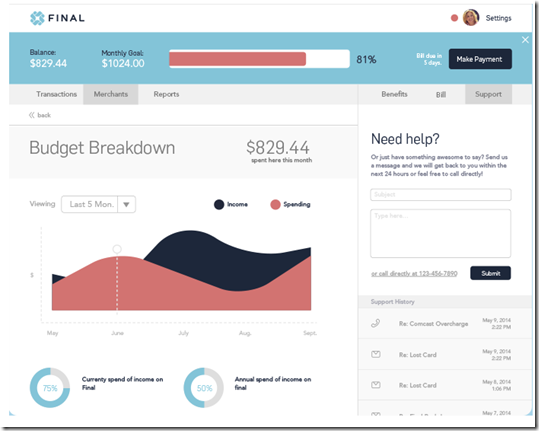