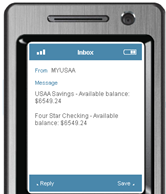 Last week, USAA released astounding figures on its mobile banking usage: The 10-month-old service is already used by 11.4% — about 800,000 — of its 7 million members, making USAA one of the largest mobile banking providers in the country (press release; see note 1).

The mobile platform has bagged more than 13 million logins in ten months, about 3% of its nearly 500 million annual customer contacts (note 2).

With the introduction of its own native iPhone app last week (note 3), USAA now supports the three primary methods for mobile access (see screenshot below):

Only Bank of America, with 2.6 million mobile users, has publicly revealed a larger mobile base. That makes USAA number two among known user bases. However, it is highly likely that both Chase/WaMu and Wells Fargo/Wachovia have cracked the one-million-user mark and are second and third largest. 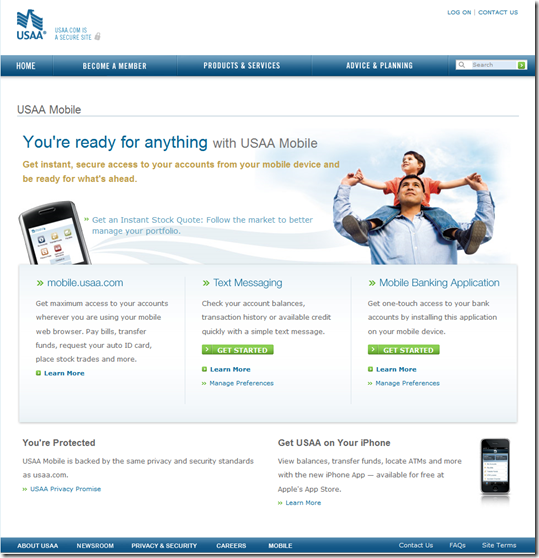 Notes:
1. On a side note, USAA posts its press releases in blog format which allows visitors to comment and/or subscribe via RSS.
2. The 3% is approximated from data in the press release: 470 million customer contacts in 2008 and 13 million mobile logins since the service was launched in summer 2008.
3. Since last fall, USAA users could access their accounts via Firethorn’s multi-bank iPhone app.