During the height of the bubble, there were dozens, perhaps hundreds of banks secretly planning to launch Internet-oriented brands. But the strategy fell out of favor with the very public downfall of WingspanBank, which lost funding during a corporate restructuring at Bank One; followed by the collapse of NextCard, which went belly-up after a ill-advised bet on sub-prime credit.

But despite these public failures, there was never anything wrong with the underlying strategy. Quite the opposite. Direct banking has been a viable business model ever since deposit deregulation in the 1970s. The Internet only makes it easier to reach and serve customers.

Case-in-point: ING Direct, still not five years old in the United States, has amassed 2.5 million accounts holding $29 billion in deposits at year-end 2004, making it the 30th largest financial institution in the United States. If they continue to grow at the same pace, they should be close to cracking the top-20 by this time next year. Their laser sharp focus on savings accounts, trendy branding, and consistent high rates has put them on the map.

This success has not gone unnoticed around the country. They are frequently discussed at industry gatherings and internal planning meetings. However, you aren’t likely to see many of its more traditional competitors jumping on the high-deposit bandwagon. It doesn’t make sense for them to alienate their customers and branch employees by offering higher rates online. And they are not about to reprice their entire deposit base to compete with ING Direct and the other high-rate institutions. 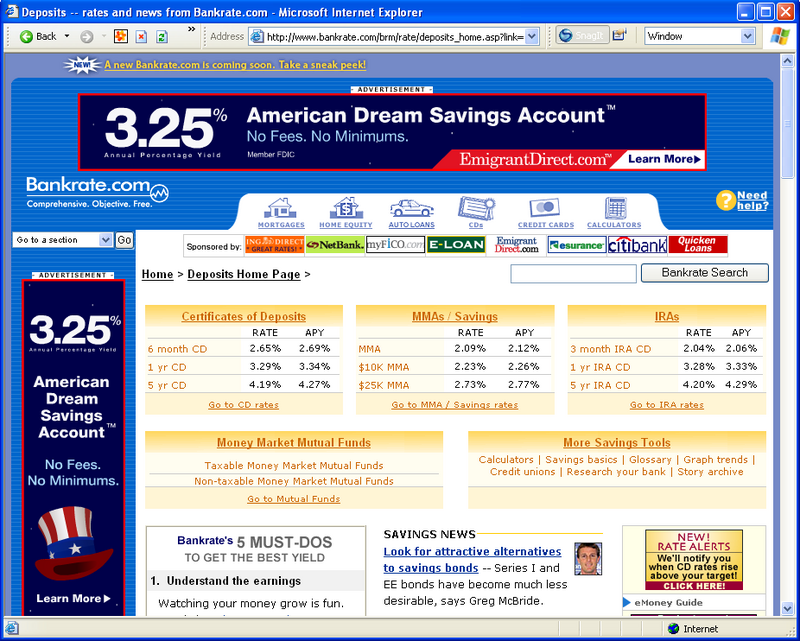 However, I think you will see smaller banks look to the Internet for growth using new brands or brand extensions. In perhaps the most aggressive launch since ING Direct in 2000/2001, Emigrant Savings practically owns the deposit real estate at BankRate.com. In a recent visit, the bank’s Emigrant Direct brand not only had the top banner, they also bought the skyscraper on the left-hand side, effectively "framing" the entire content screen (click in the inset for a better look).

Note to ING Direct, check your skyscraper ad at BankRate.com (see above). Emigrant Direct has hung a small ad on the bottom of your banner that looks like part of your ad. I hope you are at least getting a discount from BankRate.com.

If you’d like to learn more about the future of online banking include internet-only, check out the Online Banking & Bill Pay Forecast: Current, future and historical usage: 1994 to 2016 from our sister publication, The Online Banking Report.