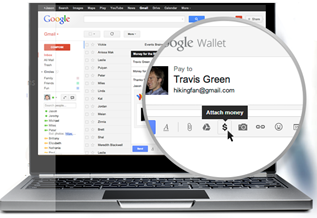 Bank transfers (e.g., ACH) are free while card-based payments will cost senders 2.9% of the amount, with a $0.30 minimum. However, all transactions are free for an unspecified time during the launch period.

With an estimated 400 to 500 million global Gmail users, the service has the potential to become an important method of sending money (it’s only available to U.S. users at this point). However, like all U.S.-based P2P services, it’s easy to send money, but not always so easy to receive it.

In my first test, I was able to claim the funds relatively easily with my four-year-old Google Wallet account. There was a short authentication process with a login, name, address, birth date and last four digits of my Social Security Number (SSN). After claiming the funds, I was then able to send money out of the system (note 2).

After sending my two cents over to Larry Page, congratulating him on the launch (see screenshots below), I then sent money to my work email account. While it was deceptively simple to send the money, I was unable to claim the money, despite already having an active Google Wallet associated with that email address.

After receiving the email notification, I went through the same authentication process as above. But after logging in and providing my personal info, I was hit with four additional out-of-wallet authentication questions, apparently pulled from public databases (I think NOT my credit bureau due to the errors..see below).

But apparently there was an error in the out-of-wallet Q&A served to me. The first two questions obviously pertained to me, and I answered them correctly, but the final two did not (note 6), so I answered “none of the above.” But Google didn’t believe me, and I was told my answers were “inconsistent” and that I could not be authenticated online.

I was invited to upload three pieces of documentation since I failed the Q&A (all required):

Unfortunately, I haven’t laid eyes on my Social Security card for several decades and haven’t a clue where it is. And in 18 years of testing online account opening, no one has ever asked for it. So I’m stuck. Had someone sent me a real payment, I would be extremely frustrated, and would have to either ask for a check to be sent, or use PayPal.

Bottom line: This is a brilliant play by Google, taking everyone by surprise. However, P2P payments (in the USA anyway) are still a pain to receive the first time which dampens their viral growth (note 7). I understand the reasons for good authentication, though it still seems like overkill given that I was only claiming a one-cent transfer via a pre-existing and active Google Wallet account (used for more than $400 worth of purchases this year). And especially after I provided the correct name, address, birth date, SSN and two additional out-of-wallet questions.

But I know the folks from Mountain View, Calif., will work the risk-procedure kinks out quickly (there is a reason it’s called “beta”). And if they stick with it (RIP Google Reader), Google should be able to build a critical mass of financially authenticated users, making “gpay” as easy as using PayPal.

Step 1: Craft email message and click on the “$” icon at the bottom of the compose screen 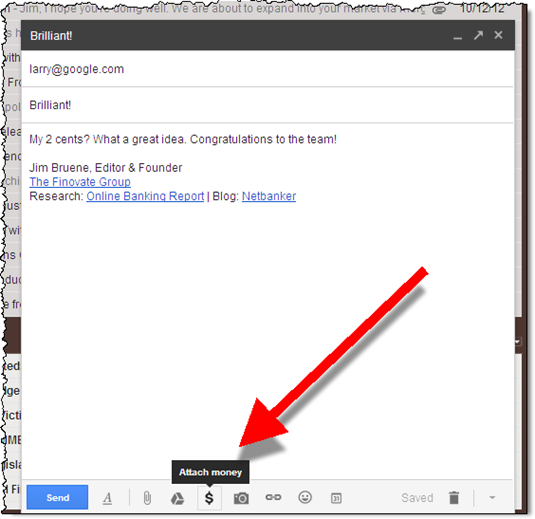 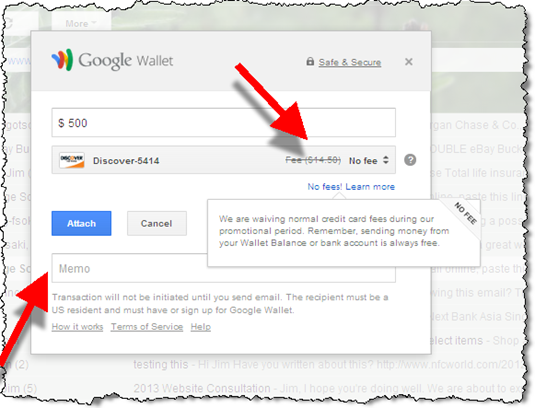 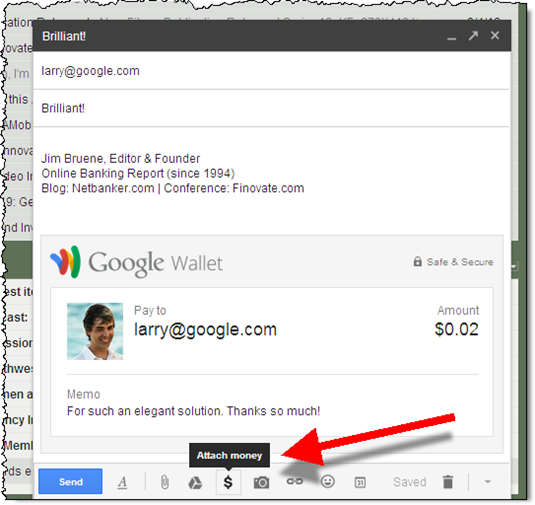 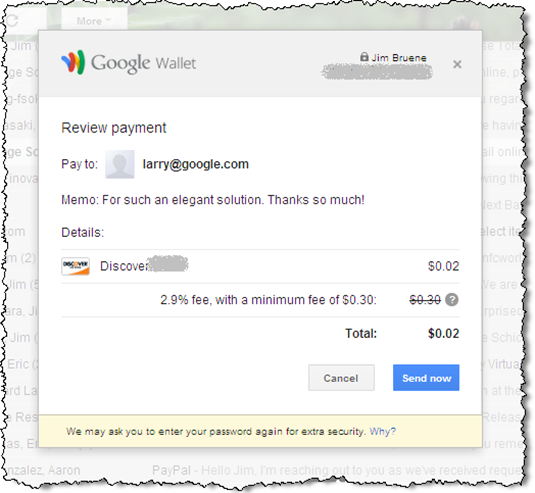 Final: Confirmation copy is placed in your inbox (note 8) 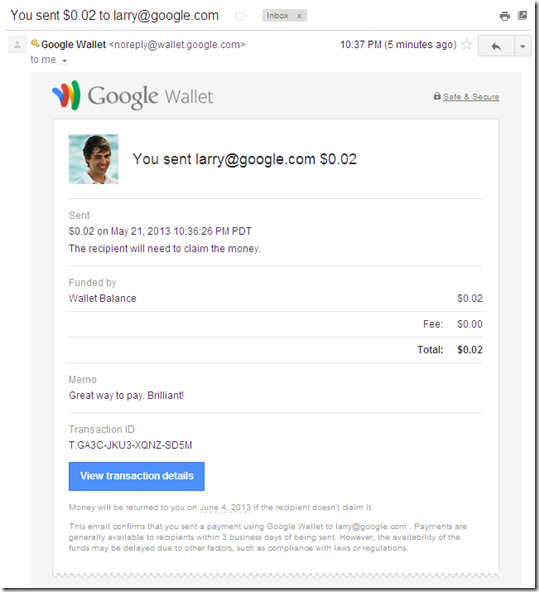 Notes:
1. During the beta test, you can become a P2P user only by first receiving funds from an existing user.
2. I have two Google Wallet accounts, one set up in 2009 and the other established in January 2013 when I got a Nexus NFC phone with built-in Wallet support. The credit card associated with both accounts was stolen earlier this year, and I had to add a new card to both wallets before I could use them. This could have triggered additional authentication requirements on the second Wallet account.
3. The payment appears as a “card” within a Gmail. There is no indication in the title of the message that it might contain money (user controls the rest of the email).
4. The transaction fee was waived for my Discover Card-based payment. I assume it would be on other card types, but I didn’t test that.
5. Users have the option to add a memo to the payment (in addition to what’s included in the email message).
6. Ironically, if the recipient was mobile-deposit-enabled, it would be easier the first time to send a high-resolution image of a check that the user could take a picture of and then deposit via mobile banking. Or, for Capital One 360 users, the emailed image could simply be
uploaded directly into their account (see post).
7. Though I suspect the last two questions could have been drawn from online info about my brother, who has a different first name and lives 2,000 miles from me.
8. Yesterday, confirmation emails went to my inbox when I sent a payment. Tonight, I am not seeing that: It’s only showing in my Sent messages.
9. For more info, see our recent Online Banking Report: Digital & Mobile Wallets (published Feb 2013, subscription).