blooom
Blooom is a revolutionary way to benefit 401(k) investors by outsourcing the management of their 401(k) accounts regardless of where they are held.
The Stats
The Story
The funny thing about 401(k) plans is that many who have these employer-sponsored retirement plans never asked for them. “Many investment companies cater to DIY (Do it Yourself) types,” Chris Costello, co-founder and CEO of blooom explained ahead of his recent Finovate demo. “We market to the ‘Don’t Want to Do it Myself’ Crowd.”

According to blooom, more than 50 million people have employer-sponsored retirement plans such as 401(k)s. And blooom is convinced that most plans are managed poorly – if at all. From poor asset allocation to underfunded accounts, too many 401(k) plans are little more than tax-deferred savings accounts rather than investment vehicles to support retirement.
It is bloom’s goal to fix as many 401(k)s as possible, which means more than just advising people on how to invest their money. Blooom’s technology actually invests on behalf the client.  It considered that a “massive differentiator” from the competition. “We’re the dietician that cooks the meals, as well,” Costello explained.
The Technology
The blooom platform is designed be easy to use. The team scoffs at investment services that rely on lots of pie charts and colorful graphs to impress investors. But that hasn’t kept blooom from putting together an eye-pleasing interface: the branded, potted daisy and a variety of pop-up plates that display text information ranging from portfolio composition details (i.e., percentage weightings) to brief explanations on why an aspect of a portfolio might not be appropriate for a given client (i.e., too many bonds for a younger investor). 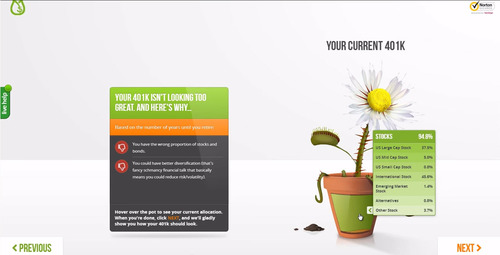 Getting started with blooom is a straightforward. First, provide your name, birthdate, and retirement date. Then link your 401(k) account. After that, the platform extracts data from your account, analyzes your 401(k), and makes allocation recommendations. Clients have some flexibility with the suggestions and can take a more aggressive or conservative approach.
The final step is the portfolio-building process, in which a human blooom advisor builds the client a new portfolio based on the recommended allocations. New client portfolios are adjusted in about 30 days, and as long as the investor remains a client, the advisor will automatically rebalance the portfolio every 90 days going forward (if rebalancing is necessary). For accounts under $20,000, blooom charges $1 a month. For all accounts above $20,000 the fee for the service is $15/month. 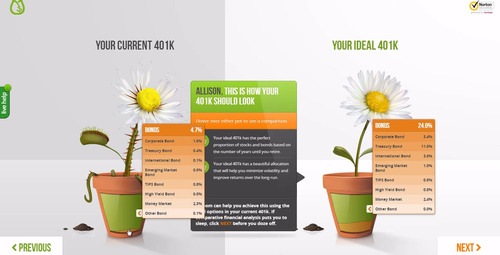 “If (the customer) chooses,” Costello said, “(they) don’t even have to look at their 401(k) for the next 20 years. Blooom will monitor the account. Rebalance it every 90 days for them And adjust the stock to bond allocation as they draw nearer to retirement.”
In many ways, “the basics” are bloom’s secret sauce. In serving a market of reluctant investors, much of what blooom’s technology does is help investors avoid common mistakes. These include errors like overweighting a single stock (especially an employer’s stock) or niche fund such as technology or energy. Blooom also steers investors towards index funds, which have traditionally outperformed actively managed funds over the long term.
The Future
Blooom has an active B2B marketing effort. The company is looking to partner with credit unions and benefits exchanges. Blooom has already partnered with ConnectedBenefits, an online benefits exchange, in a deal that will put Blooom in front of an exchange membership of more than 100,000. The company also sees a major opportunity with human resources specialists, 401(k) advisors, and professional service organizations – all of which play a role in helping employees deal with their employee sponsored retirement plans. 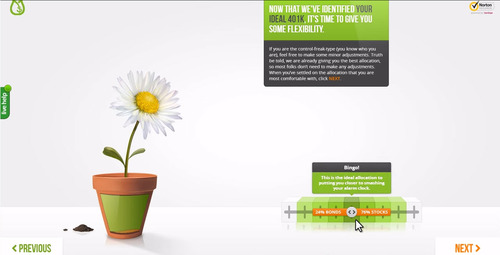 Looking ahead, a mobile app is on blooom’s agenda, and they hope to have one ready to by early 2015. That said, given the nature of the platform, there isn’t a lot of fussing over their 401(k)s for clients to do.
“People are confused. they are intimidated, and they are overwhelmed,” Costello said from the Finovate stage in September. “Blooom has figured out a way to provide simple, scalable advice to fix millions of 401(k)s and keep them fixed.”