Develops technologies based on topological data analysis that helps institutions in fields ranging from finance to healthcare to energy better understand and benefit from complex data sets.
The Stats
The Story
Some great technologies are born in basements and garages. Others have a far more – sophisticated – pedigree.
“We were called ‘one of the 10 most important advancements to come out of DARPA'” Michael Woods, Principal Data Strategiest for Ayasdi, told me in a conversation about how the company was born out of a research project at the Defense Advanced Research Projects Agency. The research itself, which involved finding better and more efficient ways to analyze and understand complex data, began in various forms in 2000. 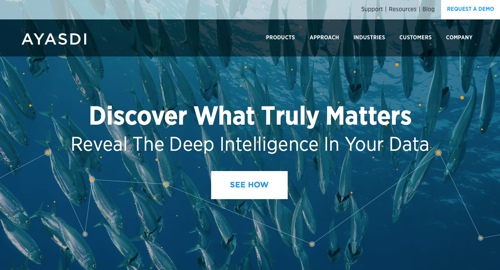 A large part of the problem is that technology was allowing greater numbers of people to generate data. But these same people were often ill-equipped to actually read and understand it. As Woods pointed out from the Finovate stage, this problem is only likely to get worse as more advanced technologies generate ever more advanced (read: complex) data to be deciphered.
Of the various projects underway at DARPA to help solve this problem, one involved a field of analysis called topological analysis. Topological analysis, put simply, is the study of ways to make structure out of unstructured data. This then makes the data machine-readable and able to drive algorithms and other processes.
Those in the topological group, including Ayasdi’s eventual co-founders Gunnar Carlsson and Gurjeet Singh, were able to show through a variety of published papers, that their technology worked and that topological analysis could generate meaningful insights from unstructured data. The point made, the researchers felt like the best option was to commercialize the technology.
The fledgling Ayasdi started out on its own in 2008, with the help of a DARPA small business research grant. By 2010 the company had developed a prototype and after securing seed funding. Ayasdi began selling the technology in 2012. 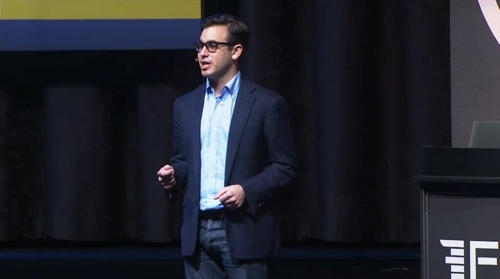 (Above: Michael Woods, Principal Data Scientist, Ayasdi)
And while reactions to the technology varied initially from resistance to “where have you been all my life?”, the company has seen a growing acceptance and with a customer base that includes  three of the five largest energy companies, seven of the ten largest pharmaceutical companies, a number of major hospital systems, and a number of the largest and most sophisticated financial institutions.
“Businesses face a profound challenge today. Data generation is rapidly outpacing data interpretation, which is to say that your businesses are capturing more data than they can effectively understand and act upon,” explained Woods. “Ayasdi is well positioned to solve this challenge.”
The Technology
Ayasdi reveals patterns in data, which then allows observers to look for not only key trends, but critical outliers, as well. These outliers or subpopulations often contain precisely the kind of information that other data analysis methods miss. During its FinovateFall 2014 demonstration, for example, Woods and his colleague Max Song showed how the technology uncovered potential fraud among a sub-population of consumers with otherwise sterling credit ratings.
Fraud detection is clearly one of the major reasons why financial institutions are deploying the technology. Ayasdi reports of one “leading transaction processing firm” that used the company’s technology to increase its ability to detect fraud from less than 30% to 99% within a given set of transactions.
Ayasdi’s technology has also proven helpful for companies looking to meet risk-oriented regulatory requirements. For financial institutions, the “stress tests” required of many banks by the Federal Reserve fit into this category. Solutions from Ayasdi have been used, for example, by banking holding companies to review and improve the way they measure the impact of various macroeconomic factors on revenues. 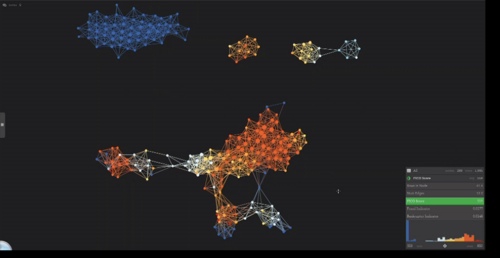 Another goal of FIs is figuring out how to best serve customers based on their different individual needs and preferences. Here, Ayasdi’s technology can be used to generate customer profiles that are both exacting and dynamic, and then conduct analysis based on factors such as purchasing behavior and income.
What makes the software particularly compelling is the way these functions are integrated in actual use. Segmenting customers by transaction type, asset manager, risk profile, and so on and then comparing the behavior of those subpopulations in different market conditions can provide managers and advisors with major insights into client behavior. This makes it easier to tailor specific products or services to specific clients.
“Whether you are private bank, a major credit card issuer, or an insurance company, you are capturing massive volumes of disparate, heterogenous, disparate data on the ways that your customers behave,” explained Woods. “Ayasdi has enabled our clients to unify their understanding of their clients, to combine these data, and better understand how to serve their clients.”
The Future
Ayasdi has had a busy fall. In addition to its Finovate debut in September, the company announced a strategic alliance with Teradata in October, integrating its data analytics technology with Teradata Unified Data Archit
ecture. Also in October, Ayasdi announced that it was partnering with SumAll.org, a nonprofit data analysis company, to help international aid organizations analyze complex data in their own environments.
And it feels as if the future for its approach to data analysis is bright. Compared to other approaches such as business intelligence, traditional databases and math software, there are a number of areas where Ayasdi believes topological data analysis is superior. Not only is TDA faster and better able to analyze sizable datasets, but topological data analysis does not require coding experience in order to maximize the technology and tends to provide a far more intuitive user experience. 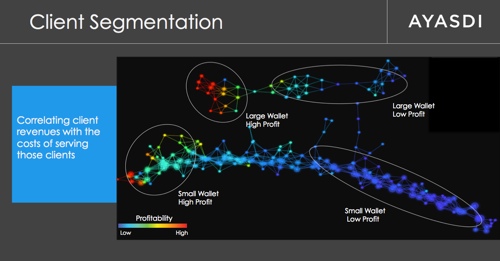 What’s ahead for Ayasdi? It is looking at deploying an app that suppresses the software in the background, making the solution even more user-friendly (Woods said the technology currently “can be used by data scientists relatively easily with a modest amount of training). For financial institutions, the most exciting potential development is what Woods called “truly predictive analytics.” This solution, which Ayasdi expects to have ready by next quarter,  will build on the company’s advanced analytics to provide users with even better capacity to develop models that accurately anticipate everything from the impact of economic events on market conditions to bacterial outbreaks and gene mutations.
“You’ve got a lot of data,” Woods said. “You can’t understand it. Ayasdi can help you more rapidly understand it, and better make data-driven business decisions.”
Watch Ayasdi’s demo of Ayasdi Finance from FinovateFall 2014.