My teenage son has just starting "Facebooking," and he loves it. It's his first foray into social networking, and I can tell he'll be a user for the rest of his life, or at least until something better comes along.

Those of us who are merely parents of social network users often find it difficult to understand its power. In my son's circle, Facebook IS the Internet. It's where every online session begins and ends and where important social connections are made and nurtured. That's why strategic investors such as Microsoft, Google and others are said to be giving Facebook as much as a $10 billion valuation (see previous coverage here).

All this has enormous implication for every retailer and service company on the planet. It amplifies word of mouth exponentially. Remember the old adage that every disappointed customer tells 10 people about their problem. With the instant broadcasting capabilities, an unhappy customer can now share his/her thoughts with 100+ Facebook friends with a single click (note 1).

And it's not something that is 15, 10 or even 5 years away. It's happening today. Case in point: this summer HSBC (UK) was forced to reverse a policy change that would have ended a common perk for U.K. student banking accounts, a multi-year grace period for overdraft credit lines with limits up to US$3,000 (see HSBC student page here).

Local students were so taken aback by this change in account terms, they formed a Facebook group called, "Stop the Great HSBC Graduate Rip-Off" (here or see screenshot below). Apparently the group was planning to rally its 5,000 members into a little civil disobedience. The group was hoping to cause customer service headaches by flooding the bank's branches, and overloading teller lines, with student customers asking for detailed explanations of the new fees.

According to news reports (here and here), the bank quickly backed off the rate change and reverted to the liberal interest-free borrowing guidelines. 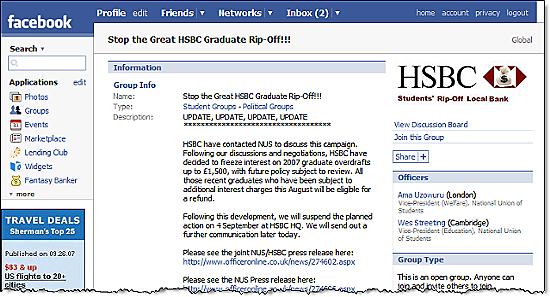 Implications
You should be using, tracking, analyzing, and brainstorming about how to tap social networks for sales, marketing, service, and recruitment.

1. And the simple click-and-complain activity can be broadcast to every friend before the disgruntled customer has a chance to cool down (and/or sober up) and think through the issue in a more rational way.