I won’t belabor the irony that the nearly $1 billion ($945 million) paid by eBay for Bill Me Later values the alternative payment and credit provider at more than Washington Mutual Bank and nearly half as much as Wachovia, at least before Wells Fargo entered the bidding.

The underlying credit product is relatively simple, a 19.99% credit account underwritten by Utah-based industrial bank CIT (terms and conditions here, see also note 1). But the distribution system, providing quick-and-easy delayed payment at the point-of-sale at 1000 online merchants, is what created the billion-dollar valuation. To use Bill Me Later at checkout, consumers simply provide their birthdate, last four digits of their social security number, and their billing address (see Amazon.com screenshot below).

According to today’s investors presentation the company will do more than $1 billion in transaction volume in 2008 and serves 4 million customers (see note 2).

I was initially surprised at the price ($945 million), but given that eBay is projecting $150 million in revenues and $50 million in profits, it makes some sense, especially if CIT is taking most/all of the credit risk. Hoped-for synergies with PayPal, which already operates a similar program, is the stated upside for the deal. 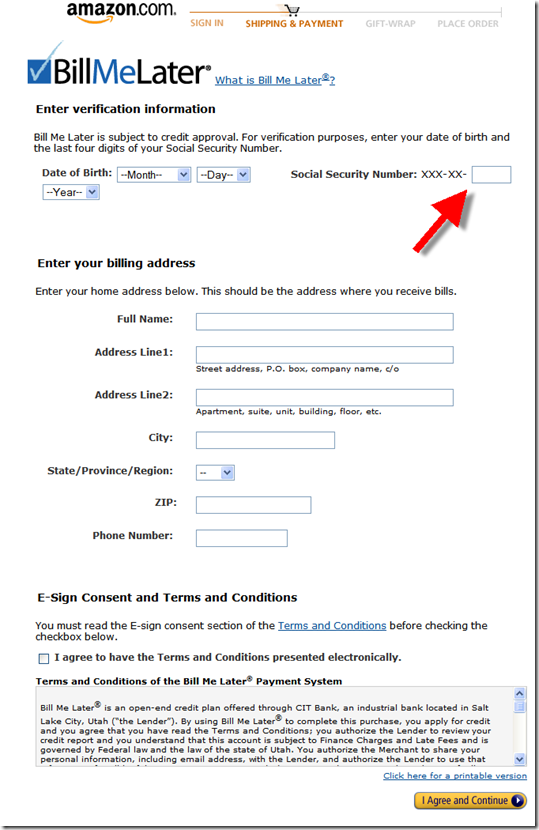 Notes:
1. CIT is not without its own problems with a market cap that has dropped more than 80% from a year ago. The company is now valued at $2 billion, just double the purchase price of BillMeLater.

2. Some historical usage numbers: An undated entry on the CIT website says that BillMeLater has served 2.5 million consumers. In a Dec. 2006 press release announcing $640 million debt-financing from Citigroup, Bill Me Later said it had served 2 million consumers.

3.  Here are the revenue and cost numbers taken from today’s investor’s presentation (expressed as percent of transaction amount):