I’m certain most major PFM providers will have an iPhone app within the next six to 12 months. It’s a valuable product extension from a functionality standpoint (see note 1). Even more important are the marketing benefits from blogger/press coverage and the App Store listing itself.

Mint posted a blog entry last week reviewing ten iPhone finance apps. The post drew two dozen comments, most asking when a Mint app would be released for the iPhone. Mint Product VP Aaron Forth replied, “We are busy working on one now.”

Most of the better-funded PFM companies are likely working on an iPhone app, but the approval process at Apple can easily take a month or more (one developer’s story is chronicled here). So we expect to see them trickle out over the coming months. 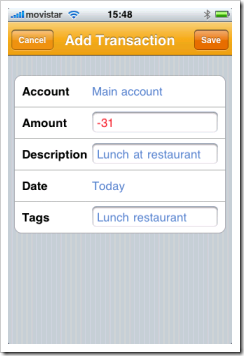 The first established online PFM to make it into the iPhone App Store is Moneytrakin’, the Barcelona, Spain-based multi-language, multi-currency PFM (note 2). We covered its launch more than two years ago (here).

The company recently announced it had surpassed 5 million transactions tracked. Assuming 250 per customer, that’s 20,000 active users. According to Compete, U.S. website traffic averages 1,000 to 2,000 per month. But many (most?) of Moneytrackin’s customers are outside the United States.

The Moneytrackin’ program, released on Sept. 19, is currently the seventh most popular app in the Finance category.

2. There are at least a dozen check registers and mini PFMs in the App Store, but none are from established online PFM providers. The only exception is iBuxfer, which claims to work with Buxfer using its API, but was not developed by the company. And in fact, according to the comments in the App Store, may be violating Buxfer’s terms of service. All the more reason to get your own app into the store before someone else does.

Launched May 16, Moneytrackin' <mo.neytrack.in> is a Web 2.0-inspired personal finance application from a Spanish developer. The free service, in public beta (looks more like alpha), has just one function, storing and categorizing transactions (click on screenshot below for a closeup). However, much more functionality is in the works (see blog here). 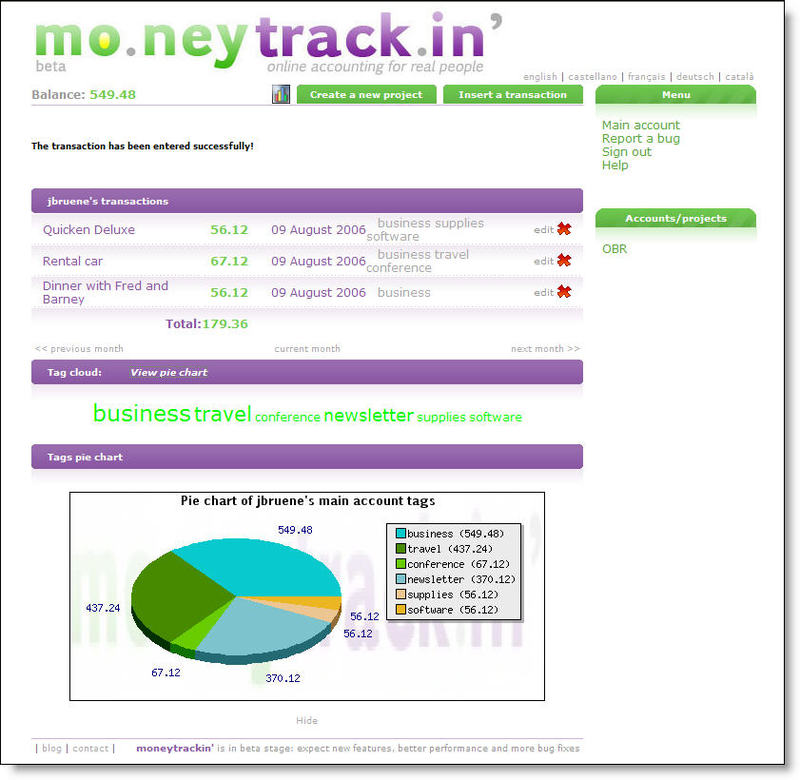 It's ultra-simple to use. Users can set up sub-accounts/projects on the fly then add transactions to each. Transactions can be "tagged" with as many categories as desired. A "tag cloud" runs on the bottom of the screen allowing users to click easily on any category to view the transactions. Finally, a pie chart shows a breakdown of expenses by tag.

The multi-language service is offered in English, Spanish, French, German, and in what must be unique in the personal finance space, Catalan, a Spanish dialect spoken by 10 million Southern Europeans.

For a complete run-down of personal finance functionality for online banking, check out our next Online Banking Report, available mid-August.