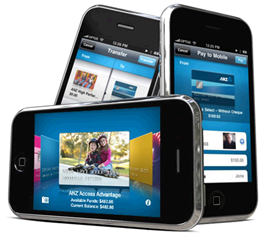 I look at lot of mobile banking apps. But there are several thousand in the U.S. alone, so I’m not going to claim that I know which one is “best” or even who should be in the top-100.

But I will say, of the mobile banking apps I’m familiar with, ANZ Bank’s is right up at the top. Kudos to the bank and Fiserv’s M-Com unit that helped with development.

Why is it so good? It’s full featured, of course. But it’s the first banking app that feels like it runs WITHIN the iPhone instead of being bolted on. It’s almost like what Apple would have done if it was building a banking app right into the operating system (notes 1, 2, 3).

I especially like how the person-to-person payments function integrates with iPhone Contacts. And how iPhone’s photo gallery can be used throughout the app to illustrate goals and payees with your pictures (click on inset above for a better view) and to store bill payment-receipts (see screenshot below).

But never mind what I think, look at actual customer usage. According to a July 15 investor presentation, in the year since it was released, the ANZ goMoney already accounts for 26% of the bank’s total online traffic. If ANZ mobile can continue that pace for another 12 months, it will surpass regular PC-based online traffic by this time next year.

ANZ goMoney demo video is definitely worth two minutes of your time
Note: Clickthrough below to ANZ website and play the video (the version on YouTube is the older version of the app) 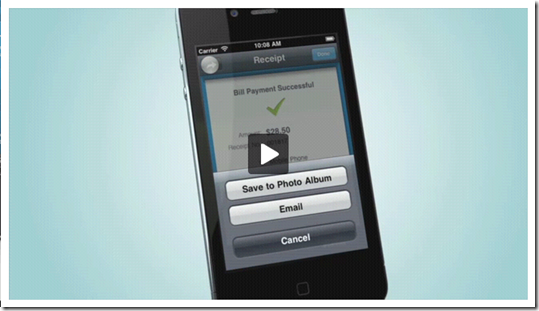 Notes:
1. Hyperbole alert. It’s Friday afternoon, so I may be getting a bit carried away. But I stand by the opinion.
2. I don’t have an ANZ account, so I’m basing my observations on the superb demo video, complete with Apple-esque soundtrack (see screenshot above).

As mentioned in Brandon's post earlier today, New Zealand-based
M-Com has amassed an extensive client list in the Australia/New Zealand market. Whether they can make the leap to the United States is unknown, but we should find out soon, since the company is targeting some well-known U.S. banks.