Our sister publication, Online Banking Report, is constantly on the prowl for innovations in online finance. When it finds a new one, it awards the new development an "OBR Best of the Web." During its 12-year history, the newsletter has handed out about 80 such awards (click here for the pre-2006 list). The main criteria for winning is "raising the bar" in online consumer banking, credit/debit cards, payments or lending (see note).

The 2006 winners in chronological order were:

It was a good year innovation-wise, and we look forward to continued growth in 2007. One prediction: multiple winners in the mobile finance arena. For more information on the top developments of 2006 along with the latest 10-year forecast, see Online Banking Report #137.

Note: Usually, the first company to implement a significant new feature wins the award. And generally there is only one award for each new feature. For instance, Signet Bank was named best of the Web in 1997 when it launched the first triggered-email alert. Then Charter One won the award in 2002 when it took the triggered-alert feature to a whole new level, integrating voice, fax, and email options into a full suite of alerts. Online Banking Report founder and managing editor Jim Bruene makes the final decision. The only way to win the award is by being innovative. There is no nomination process, no deadline, nor any way to influence the decision.

For the past few months, I've been more or less obsessed with RSS feeds (see our latest full report on the subject here). All of a sudden every information-delivery problem seems solvable with a feed.

And there is enormous potential for feeds in everyday banking which primarily involves simple information queries: What's my balance? Did my check clear? Was my mortgage paid?

The first account-specific financial feed
I've been on the lookout for the first financial institution with account-specific feeds. That search continues, but a non-bank has been using feeds for bill-payment-status updates: previous OBR Best of the Web winner billQ <mybillq.com> (see previous coverage here).

The company has an "RSS Feed" option on its list of automated bill-payment-tracking mechanisms which also include an iCalendar subscription, an Apple OS X widget, or a toolbar applet (see screenshot below for billQ subscription options). 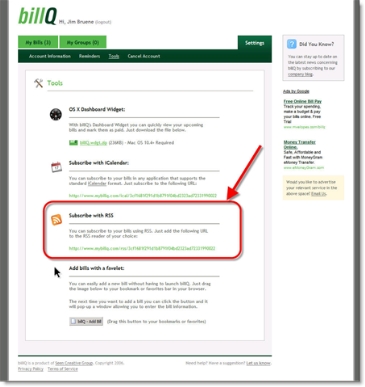 When using the RSS feed option, bills automatically appear in the user's newsreader software. Below is an example using the Newsgator Web-based reader: 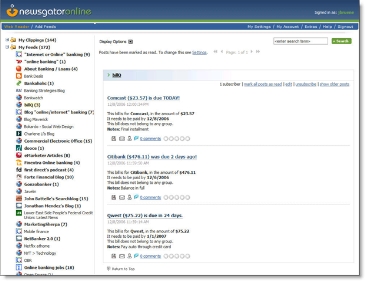 Our most recent OBR Best of the Web winner (NB Sep 1), Seen Creative's billQ, has achieved another industry first, a bill payment-tracking widget for Apple Mac users (here's where you can download it from Apple's site).

The widget allows Mac users to drop a small billQ screen right onto their desktop (see NB 2 May 2005). It allows users to see what bills are due and mark them as paid without ever leaving their desktop.

The widget can also be downloaded at billQ's website <mybillq.com>.

In the latest from Online Banking Report, "Personal Finance Features for Online Banking," we've awarded an OBR Best of the Web 2006 to a new Web-based bill management service. It's the third winner of the year,* and 53rd since the first recipient in 1997 (here's the list).

And the winner is, drum roll please, billQ <mybillq.com> a new Web 2.0-inspired bill manager from Seen Creative Group <weareseencreative.com>, a relatively new website-design firm based in Rochester, NY. The company was chosen for raising the bar in three areas: 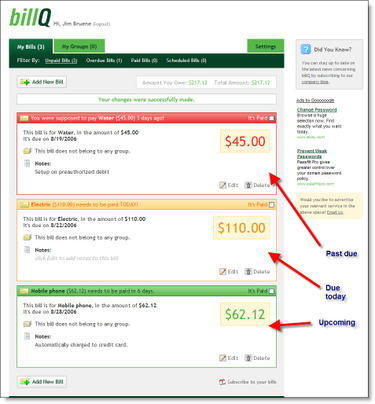 Read the entire review, along with a look at a dozen other online personal finance applications, in this month's Online Banking Report (#131/132).

*Previous 2006 winners include E*Trade Bank for its Mileage Maximizer airline card mile aggregator (NB 7 Dec 2005) and Prosper for its person-to-person lending platform (NB Feb. 5 and others). 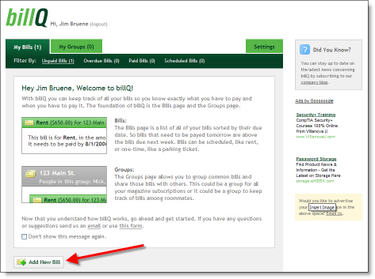 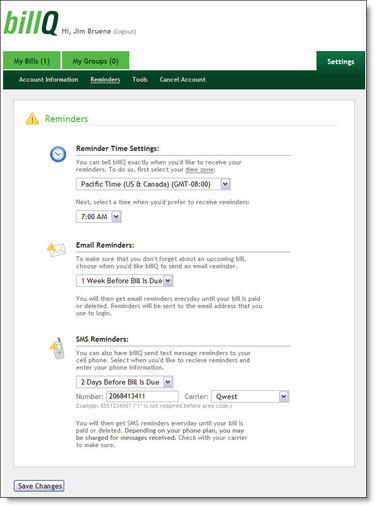 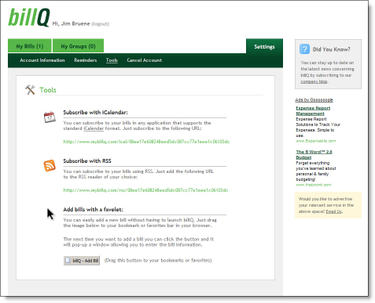