I have not as yet jumped on the Bitcoin bandwagon. Unlike other digital financial inventions that seemed obviously useful when they first appeared (e.g., Internet banking, P2P lending, two-factor authentication, etc.), an open-source, math-based virtual currency created by an anonymous cryptographer seems a bit of a stretch.

But even the Fed (Chicago) complimented Bitcoin in a letter published today, saying:

“<Bitcoin> represents a remarkable conceptual and
technical achievement, which may well be used by existing financial institutions
(which could issue their own bitcoins) or even by governments themselves.”

While remaining skeptical, I am at least coming to understand why it’s needed. And startups are beginning to show up with businesses built on top of the currency, which helps explain just how important it could be.

Case in point: BTCJam, a global P2P lending outfit, with founders in Brazil and San Francisco, lends in Bitcoins. With participants in 85 countries, this is the first P2P lending platform that successfully crossed national borders.

The startup has already done 2,700 loans worth more than $1 million since its launch a year ago. In comparison, Prosper originated about 6,000 loans worth $28 million during its first year. Prosper’s loan size in year 1 was more than 10x that of BTCjam (Prosper average = $4,800 in 2006).

The company is currently in the process of raising about $1+ mil via Angel List.

Like most P2P lending platforms, borrowing requests are vetted by the platform. Once approved, they are displaying to the network so that prospective lenders can fund the request. Generally, lenders spread their risks by only backing a portion of each loan.

Since BTCjam is global, it cannot rely solely on traditional credit scores. Instead, it validates the borrower in a number of ways across various social and payment networks along with traditional credit checks, address verifications and income verification. The results are displayed within the loan listing (see screenshots below).

BTCJam has made 2,700 loans, of which 1,700 have been repaid, with 1,000 active. The company does not say how many have defaulted. Most of the borrowing is for small amounts over short time periods. The average loan amount is $400 to $600 with annual interest rate of about 45%. But most loans are very short duration with an average term of 35 days. The platform takes a 4% advance fee for loans less than 10 BTC (about $2,000) and 1% of higher amounts.

Many borrowers appear to be testing the waters and/or building their reputations through short loans quickly repaid at nominal rates. In addition, there are a number of borrowers using the platform to make Bitcoin currency bets.

Borrowers can choose to repay their debt in straight Bitcoins, but that entails a great deal of currency risk. To avoid that, borrowers can peg their loan to USD, GBP or other currencies. That way, fluctuating Bitcoin values are less of a concern if the funds are converted to local currency. Alternatively, borrowers can essentially short Bitcoins by keeping the funds in BTC and hoping the value against the USD drops.

The company has had loan participants from 85 countries. 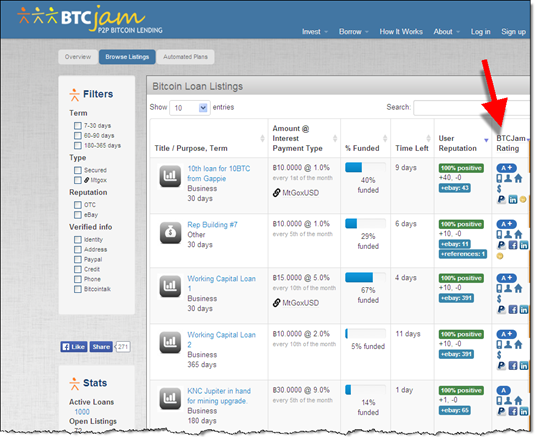 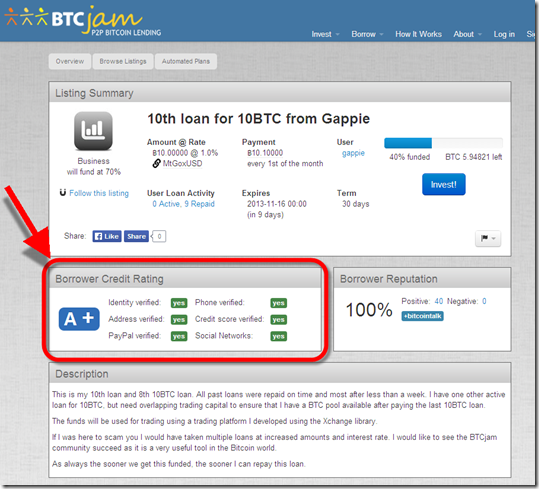 ——————————-
Notes:
1. We have published three reports in P2P lending (OBR 127 in 2006; 148/149 in 2007; and SR-5 in 2009). Our latest P2P lending market forecast is contained in the current Online Banking Report here (Jan 2013, subscription). We also covered equity and debt crowdfunding a few months ago (see Online Banking Report on Crowdfunding, subscription).
2. We are just finishing a report on Virtual Currencies. We’ll announce it here by the end of the month.