If you haven’t been following Twitter the last few months, you may not realize it now has almost eight million monthly unique visitors according to Compete. That’s almost double the traffic it had just two months ago and a nearly a nine-fold gain from a year ago.

To put that traffic in perspective, it’s more than half that of the NY Times and slightly more than banking giant Wachovia (see Compete chart below). 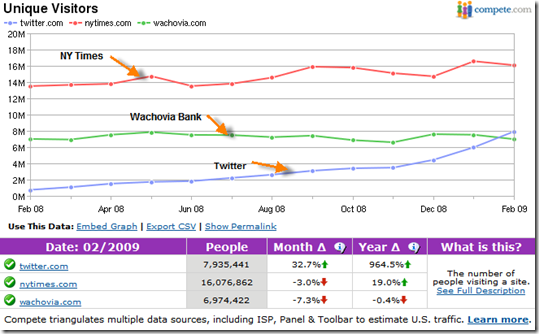 Banking activity
Financial institutions are pretty new to the micro-blogging platform. In a search today, we found 15 U.S. banks and 22 credit unions with active Twitter feeds (see notes 1, 6-8). There were also and nine international banks for a total of 46.

Opportunity
Participating in Twitter is a low-cost entry into social media that can actually help save a customer relationship or three. Compared to blogging, it is much less labor intensive. It’s also less of a marketing platform given the 140-character limit in posts. But in the current environment, perhaps less truly is more. By all means, find a gung-ho Facebook devotee in your bank and let him or her get you into the Tweeting game.

Notes:
1. To be considered active, the bank or credit union had to have set up a Twitter account, customized it with its logo, have made more than 1 update or “Tweet,” and have at least 10 followers.
2. This is not a complete list. With a few exceptions, we only looked for financial institutions with “bank” or “credit union” in their name.
3. Wells Fargo’s Twitter page says it will be launching soon.
4. Twitter URL = www.twitter.com/<shown below>
5. For more on bank blogging, see our Online Banking Report on Banking 2.0
6. List and totals updated with ING Direct and First Federal on 16 March 2009
7. Searched on “CU” and found eight more credit unions on 17 March 2009. Thanks Gabriel Garcia.
8. Added NAB’s Ubank from comments, unsure why it didn’t show up on “bank” search